The public inquiry into the proposed development on the Century House site in Tanner Street has opened at Southwark Council's Tooley Street building. 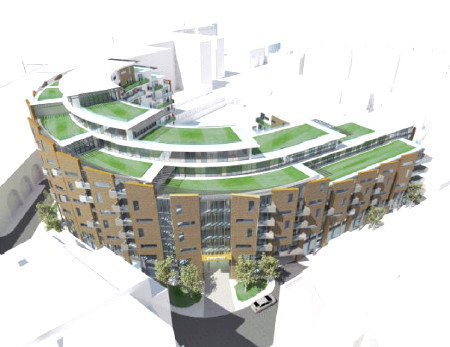 The hearing, before planning inspector John Papworth, began on Tuesday and is expected continue until Thursday.

The application for a development of 154 homes in a curved building rising to ten storeys was unanimously refused by Southwark's planning committee last November.

London & Quadrant Housing Association is appealing to be allowed to develop the site bounded by Maltby Street, Tanner Street and Riley Road.

Daniel Kolinsky, counsel for Southwark Council, said that the authority was concerned about the height, scale and massing of the proposed development designed by Make architects.

"This is not the prime location for high density development," he added stressing a second reason for maintaining refusal.

Earlier Thomas Hill QC, making an opening submission for the appellant London & Quadrant, had reminded the inspector that there was existing approval for a scheme on the site but claimed that the proposal before the hearing would deliver an improved development in the form of architecture, content and quality.

Claims that the building was inappropriate in height, scale and massing and had too great a density would be hotly contested.

"The quality of the scheme more than justifies numerical density," he concluded.

In written submissions both Monmouth Coffee and Neal's Yard Dairy expressed concern that approval for the scheme could be a precedent for more unsuitable buildings.

The coffee company, which occupies railway arches in Maltby Street, warned that the road "would become a dark, sunless and narrow canyon". The dairy, based in arches between Millstream Road and Gedling Place, claimed that "higher buildings block more light and create windy runs, further interfering with the quality of life of those currently working and living in the area".

The first witness was the council's head of design & conservation Michael Tsoukaris who claimed that the scheme would be in conflict with planning policy and relevant design guidance.

He said that the Southwark Plan "requires a proposal to positively respond to its local context and comply with all policies relating to design and does not compromise the development potential of, or legitimate activities on, neighbouring sites."

He also quoted the requirement that "a building's height, scale and massing be appropriate to the local context and not to dominate its surroundings inappropriately".

In conclusion he said: "I consider the scale and design of the proposed development to have failed to respond adequately to its context, to which it will appear incongruous and over-dominant."