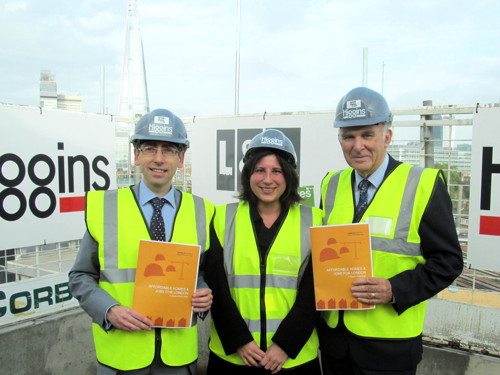 Stephen Knight AM, Cllr Anood Al-Samerai and Dr Vince Cable MP on the roof of The Arc in Tanner Street

The report, published by Lib Dem London Assembly member Stephen Knight, sets out how the Mayor of London could use land owned by the Greater London Authority to build thousands of new affordable homes, as well as borrowing cash to expand the housing stock even more.

"This report is about addressing the abject failure over the last 35 years to build anything like enough affordable homes," said Stephen Knight AM.

"There is now an overwhelming economic case for investment in new affordable homes in London.

"Capital investment funded by public borrowing is economically sound. At a time when finance is cheap and spare capacity exists in the construction sector it makes absolute sense to borrow to build. It would be criminal to not take advantage of these favourable circumstances."

Dr Cable said he broadly welcomed the report's "eminently sensible" findings which he summarised as a call to London's Mayor to "get on with it and show a bit of imagination".

The business secretary launched the report on the top floor of The Arc, a new £20 million housing development on the site of Century House in Tanner Street.

Originally rejected by Southwark councillors, the 154-home scheme was given the go-ahead by a Government planning inspector after a public inquiry.

A 3-bedroom flat at The Arc is currently on the market for £1.5 million.

"I also am really impressed with the connection they are making between housing and jobs," said Cllr Al-Samerai.

"Certainly I know lots of residents in my ward in Bermondsey are very keen to do apprenticeships and get jobs in construction.

"Vince was making very good points about forward planning so that where we know developments are happening, people have the skills to get those jobs and do them well."

She warned that Labour Southwark's policy of accepting large payments in lieu of on-site affordable housing at riverside development sites in SE1 would have long-lasting social consequences for the borough.

"I think mixed communities are really important and that's what makes Southwark special," she said.

"I think if there was the political leadership to make that happen, the London Assembly in this report has suggested lots of ways doing that."

• Watch the extraordinary marketing video for new homes at The Arc