CARE International UK is celebrating 25 years of defending dignity and fighting poverty with a striking open-air photography exhibition on the Bankside riverside walkway near Tate Modern. 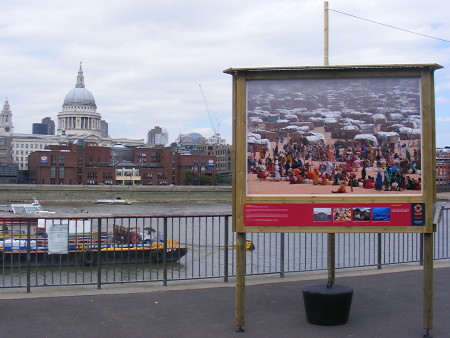 CARE International, which has its UK base in Rushworth Street, works to combat poverty and injustice in more than 70 countries and helps more than 59 million people worldwide.

The exhibition showcases 25 striking photographs depicting CARE's work in a wide variety of countries and cultures around the world, highlighting issues affecting poverty worldwide from climate change and natural disasters to education and women's rights.

"We are honoured and humbled by the commitment and support we have had from the British public over these years," says Geoffrey Dennis, chief executive of CARE International UK.

"It has enabled us to work tirelessly in so many countries, where people struggle every day with the harsh reality of poverty."

Each of the large-scale photographs is accompanied by information about the image and the wider issues raised.

"The work we do is only possible because of the strength and resilience of those we work with, and by the generosity and empathy of those who support us," adds Dennis.

"The British public is invited to view and enjoy these images free of charge, as our way of saying thank you."

The images can be seen on the riverside walkway at Bankside – between the Founders Arms and Millennium Bridge – until Sunday 18 July.