The London Assembly's transport committee is to consider the London Promenade proposal to widen the Thames Path in SE1 as part of a wider investigation into walking in the capital. 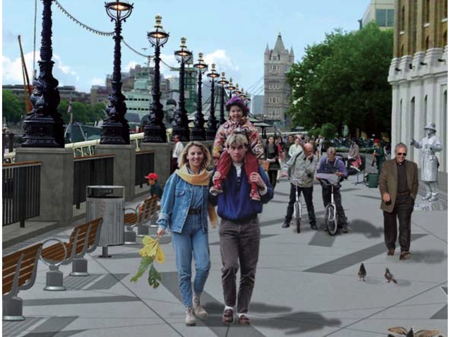 The London Promenade, devised by Bermondsey architect Michael Davis, is a proposal to widen and transform the riverside walkway between Gabriel's Wharf in the west and Butler's Wharf in the east.

The scheme would ensure continuous public access to the riverside at places where the Thames Path currently sends walkers inland such as at Clink Street.

The number of Londoners and tourists using the Thames Path has soared in the past decade and the scheme's promoters claim that the potential of the path needs to be unlocked through "thoughtful" urban design.

The London Promenade has been featured in the recent 1 City, Many People exhibition at City Hall as part of the London Festival of Architecture.

The exhibition brought together various schemes to make buildings and public spaces in the capital more accessible.

The London Promenade is one of the long-term proposals to boost walking in the capital to be considered by a City Hall investigation this summer.

Caroline Pidgeon AM will lead an investigation on behalf of the London Assembly's transport committee to assess the effectiveness of current plans to get people walking and look at what more could be done.

"The Mayor wants 2011 to be the 'year of walking' but to encourage more Londoners to make their journeys on foot he will have to carefully tailor his proposals and investment," says Caroline Pidgeon AM.

"There are real benefits to getting people walking, especially when you consider that Londoners make more than a million trips of less than a kilometre by car every day.

"I want to identify the best ways to make it easier and safer for Londoners to walk instead, not just next year but in the longer term."

The investigation will consider large aspirational projects like the London Promenade and Living Streets' plans to create a pedestrian network in central London alongside signage schemes like Legible London and local authority initiatives aimed at improving the streetscape for pedestrians such as the recent transformation of Walworth Road in Southwark.

The investigation will involve site visits and evidence-gathering from organisations including Transport for London, Sustrans and Living Streets. A full report will be published in the autumn.

• To contribute your views to the investigation, email [email protected]

What do you think of the London Promenade?