A conceptual image of the Bricklayers Arms intersection with the flyover replaced by a new park and housing has gone on display in Bloomsbury. 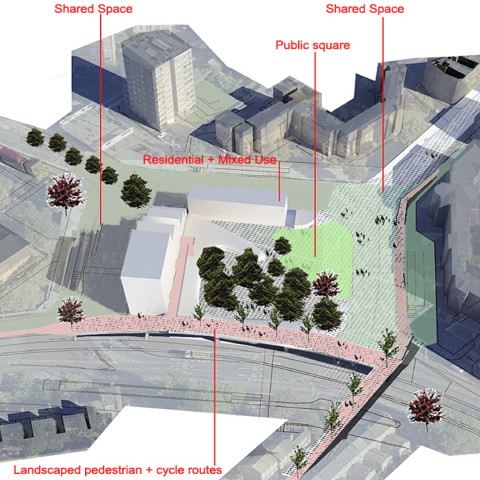 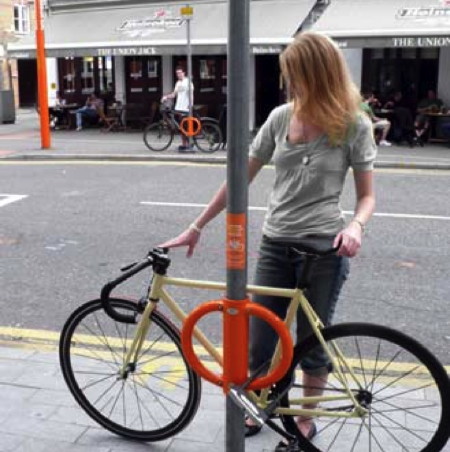 The small Cyclised Cities exhibition at New London Architecture includes a selection of schemes and concepts to make London a more pleasant place for walkers and cyclists.

Southwark-based David Nossiter Architects and Michele Ragozzino Architecture & Design have been working with Southwark Cyclists to think about how to transform the Bricklayers Arms junction.

Groups including Southwark Cyclists and Southwark Living Streets argue that although the junction is busy, the traffic volume does not warrant the presence of the 38-year-old flyover which segregates the communities to the north and south.

The concept includes a new park at the centre of the intersection with a community cafe as well as a shared public square at the southern end of Tower Bridge Road.

A much smaller bridge for pedestrians and cyclists would link Darwin Street with the northern side of the intersection. The vision also includes mixed-tenure housing and sports facilities.

Although Transport for London has no plans to remove the flyover, top councillors in Southwark including leader Cllr Nick Stanton have previously expressed support for the idea of a joint approach to come up with new ideas for the junction.

Other SE1 schemes on show

The exhibition includes a panel about Space Syntax's proposed junction design to replace the southern roundabout at the Elephant & Castle. Although the caption says that the scheme was approved by Transport for London in June, the Mayor's office has since ordered further studies on traffic flows and is thought to favour retention of the roundabout.

There is also a sheet outlining Bermondsey-based architect Michael Davis's London Promenade proposal to create a widened walkway along the SE1 riverside.

• Cyclised Cities is at New London Architecture in Store Street until Friday 30 January 2009.

• Cyclised Cities is showing alongside the Putting the Brakes on Bike Theft exhibition which showcases new bike parking design that makes life easier for cyclists and harder for bike thieves, such as the Cyclehoop that has recently been installed on street furniture in the Bankside area.

• In the adjacent gallery the Digital Cities exhibition includes more images of the proposed Elephant & Castle southern roundabout scheme as well as a virtual model of the South Bank.