Itinerant ice cream selling is to be prohibited by Southwark Council along the SE1 riverside from the Oxo Tower to Shad Thames. 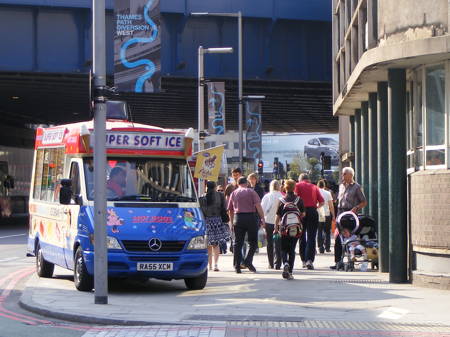 Complaints about noisy buskers and ice cream vans parked with engines running have been made by Bankside residents for a decade. It is ten years almost to the month that regular informal talks about combating the nuisance began with council officers.

Complaints from residents were made days after Tate Modern opened in May 2000 and the meetings with their representatives took place in a council office in Redcross Way.

Ice cream trading will be prohibited in riverside streets from Oxo Tower Wharf in the west to St Saviour's Dock at the eastern end of Butler's Wharf. The southern boundary will be Southwark Street and St Thomas Street.

Currently there is much concern over ice cream vans parking with engines running outside Shakespeare's Globe and on the pavement at the corner of Hopton Street and Southwark Street.

Street trading will be restricted to two licensed pitches outside Tate Modern and Shakespeare's Globe.

Discussions over the design of structures for legal trading will take place with Better Bankside which is expected to manage the project. Planning consent is required for the proposed riverside structures but the order could come into effect next summer.

Cathedrals ward councillor David Noakes, who appeared before the committee and welcomed the report, reminded the committee that the issues of ice cream vans and buskers were long-standing concerns of residents.

Members also agreed a motion moved by the former chair Cllr David Hubber that where possible the licensing sub-committee should in future meet at the council's Tooley Street building when hearing applications for licences in the north of the borough.

Cllr Norma Gibbes opposed the move saying that "the Town Hall is the heart of the borough, the heart of Southwark". However, Cllr Cathy Bowman argued that it was in the interest of local authorities to make meetings as accessible as possible. "Public convenience is more important than our own," she added.