The funeral of former Southwark Cathedral organist Ernest Warrell, who died last month aged 95, has taken place at the cathedral. 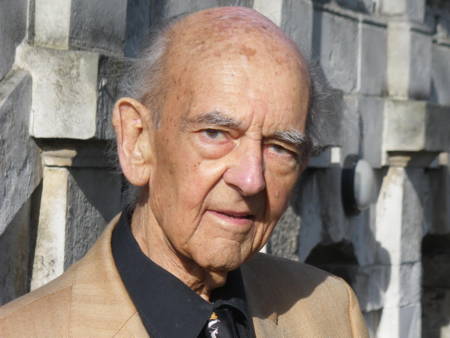 Stewards ran out of service sheets as at least 450 people crowded into the nave.

The Revd Peter McGeary, preaching at the service on Wednesday afternoon, said that Ernie Warrell had "resolved to learn to play the organ" when visiting St Paul's Cathedral at the age of about nine and a few years later "resolved to be an organist" at Southwark Cathedral when attending a service there.

Ernie Warrell was born in Camberwell in 1915 and after attending Trinity College of Music he briefly worked at Sharwood's pickle factory. But in 1937, at the age of 22, his wish came true when he was articled as assistant to the organist of Southwark Cathedral, Dr EF Cook.

During the Second World War Ernie was called up to serve in the Pioneer Corps, Royal Scots and the Middlesex Regiment and Special Operations Executive.

Afterwards he returned immediately to Southwark where in 1946 he was appointed assistant cathedral organist and Guy's Chapel organist.

Later he moved to St Mary's Primrose Hill and St John the Divine Kennington. After several academic posts he returned to Southwark Cathedral in 1968 to be director of music.

He retired in 1975 but remained extremely active. He was choirmaster at St Paul's Covent Garden whilst also being organist at Harrow and Wembley Progressive Synagogue. For the last decade he had been director of music at St Paul's Deptford.

Archbishop of Canterbury Rowan Williams awarded him a Lambeth MA in 2006.

The choir for funeral was provided by the Lynne Choir which is based at St Paul's Actors' Church in Covent Garden where Ernie was choirmaster. The first lesson from Isaiah was read by Rabbi Frank Dabba Smith.

Afterwards the congregation remained seated to hear cathedral organist Peter Wright play Bach's Prelude and Fugue in B minor. He had played this favourite piece to Ernie in Guy's Chapel in July just twelve days before he was admitted to Guy's Hospital. He died at the hospital on Tuesday 17 August.

He is survived by his wife Jean and three children.

The ashes of Ernie Warrell are to be buried in the cathedral.