Tower Bridge bascules could be used as advertising billboard

The bascules (lifting sections) of Tower Bridge could be covered in advertising for three months this winter if plans by the City of London Corporation are approved by Tower Hamlets and Southwark councils. 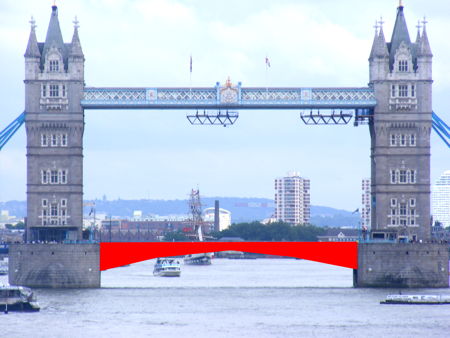 Tower Bridge is currently part-way through a major repainting programme timed for completion before the 2012 Olympic Games.

This winter scaffolding will be erected on the bridge's bascules for three months so that the existing paint can be stripped away and a new finish applied.

Tower Bridge will continue to be open for river traffic whilst the scaffolding is in place but there will be reduced clearance for large vessels.

The City of London Corporation, which maintains the structure, has applied to Tower Hamlets Council and Southwark Council for listed building consent to display sponsorship messages on the scaffolding shroud.

The PVC banners would be displayed on both the upstream and downstream sides of the bridge. Each section would be 39 metres long by 11 to 5.5 metres high.

In a statement submitted to Southwark Council with the application, the City Surveyor's Department says that the repainting work "presents a one-off opportunity to utilise the scaffolding for sponsorship".

"There is no intention whatsoever that Tower Bridge becomes a glorified advertising hoarding.

"The City recognises and protects the bridge as a grade I listed building, a significant part of London's heritage and a global icon."

Earlier plans to display a countdown clock for the London 2012 Olympic Games at the top of the bridge came to nothing; a clock will instead be installed in Trafalgar Square.

• The Southwark application reference is 10/AP/2313