The Southwark Young Pilgrims Project has held its 2011 showcase evening high above the Thames at Tower Bridge. 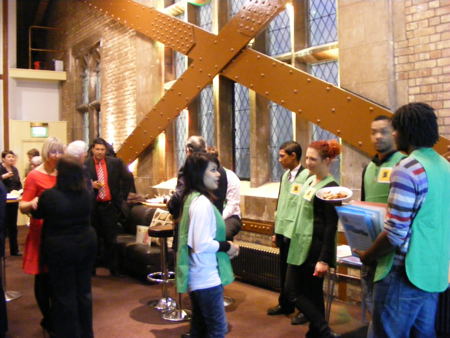 The event was hosted by Tower Bridge Exhibition on Thursday in the north tower lounge which has an original floor to ceiling window flooding the room with daylight and spotlight by night.

Young Pilgrims 'graduation' ceremony is always held on a City Cruises vessel as it passes through Tower Bridge.

Co-ordinator Veronica Alden spoke about the scheme which is a Southwark Heritage Association initiative providing training and work experience in tourism to young people at school or living in Southwark.

The award-winning project, praised by Sir Michael Caine, is directed at students who are disengaged or underperforming at school.

The name is inspired by the Pilgrim Fathers who began their journey to America in Southwark in 1620.

During the evening recent Young Pilgrims were present acting as hosts to the guests who included Lambeth & Southwark London Assembly member Val Shawcross.

Also at the reception were patron and former Southwark mayor Charles Cherrill, with his wife Josie who is a committee member.

Fundraising is being sought from Southwark businesses and supporters for the two annual out of school hours courses.