The Tower Bridge Exhibition has launched a smartphone app for iOS and Android devices. 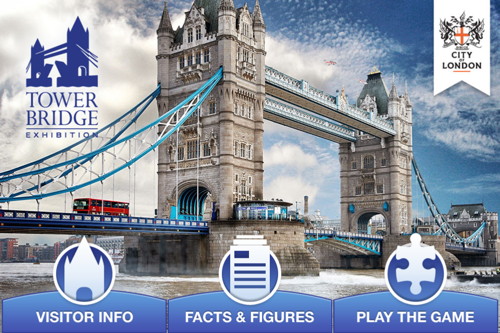 Tower Bridge now has a smartphone app which allows users to play simple puzzles based on pictures of the famous bridge as well as find out about the Tower Bridge Exhibition.

"Tower Bridge is one of London's most prestigious landmarks and tourist destinations and we are keen for visitors to have some fun with the games, quiz each other on bridge facts and enjoy the animated videos of bridge lifts, while also making it convenient for them to book tickets on the go," said business manager Chris Earlie.

One obvious omission from the first version of the app is the schedule of bridge lifts. Several buttons in the app open the phone's web browsers and send users to the Tower Bridge website which is not mobile-optimised.

The app is available from Apple's App Store and the Google Play store.

• From 6 to 26 March the west walkway at the top of Tower Bridge will be closed for maintenance. Admission to rest of the exhibition will be offered at a discounted rate.