A tree has been planted on Waterloo's Millennium Green in memory of Gillie Johnson. 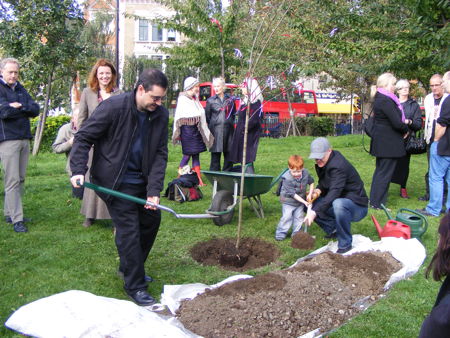 A crowd of around 40 people gathered at lunchtime on Tuesday for the short ceremony in memory of Gillie Johnson who died suddenly last January from cancer at the age of 61.

The site was chosen because Gillie was a co-founder of the organisation that established the park. As Waterloo Green Trust chair she set up the partnership between Bankside Open Spaces Trust and WGT. She was also a founding director of WaCoCo, the Waterloo Community Coalition.

Last year she described the Millennium Green as "a green space in the heart of the city but also a centre for the whole community".

The chosen tree is an Amelanchier lamarckii 'Ballerina', sometimes known as Juneberry or Snowy Mespilus, and was chosen as something special to inspire those who might want to visit and think of Gillie at any time of year. Elegant white flowers appear early in the year with strong green foliage turning to reds and bronze in autumn. Its purple black berries can be made into jam and jellies.

BOST director Helen Firminger, who welcomed Gillie's friends and colleagues, said she found her to be "committed, passionate, generous and very supportive".

One of the quotes from her obituary read out to her gathered friends said: "Gillie believed that voluntary organisations had the potential and responsibility to bring about real change – to take risks, to act with creativity, and to truly be guided by the people they were meant to serve.

"Encouraged when these ideals were realised, and outspokenly critical when they were not, she looked dismissively upon organisations that became preoccupied with gaining contracts and institutional growth."

After other tributes all those present shared in the planting and decorating of the tree. A plaque will be added later in the year.