The Mayor of London was joined at City Hall by Britain's top political cartoonists for the launch of 'Make Your Mark On the Future', a two-day festival of drawing in the area between London Bridge and Tower Bridge. 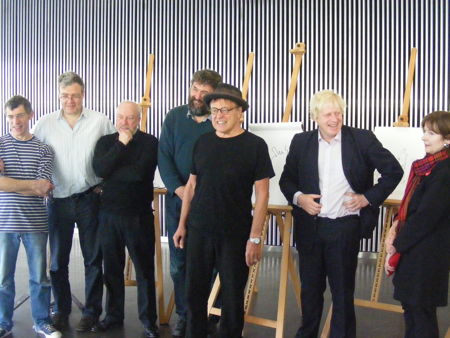 Boris Johnson with some of Britain's best-known cartoonists 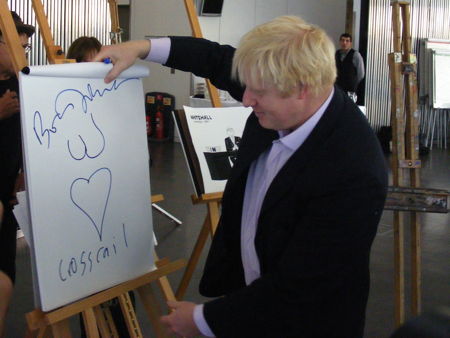 The Mayor shows off his handiwork

Top artists and cartoonists, architects and archaeologists will join Londoners for the two-day celebration of London's changing river and skyline.

"Drawing is not about being the best it's about putting across the way you feel, right there, in the moment," says Boris Johnson.

"The world is your sketchbook and I hope everyone will be inspired to join in The Big Draw."

City Hall was hosting a preview of the Battle of the Cartoonists which takes place on Saturday afternoon.

With easels at the ready, four national newspaper teams will compete to make the most spectacular banner in The Scoop on Saturday at 3.15pm.

At Friday's preview the Mayor, who despite being a published illustrator claimed he "can't draw for toffee", was persuaded to draw his own doodle.

Sue Grayson Ford, director of the Campaign for Drawing, said: "Big Draw events are designed to break down the 'I can't draw' barrier. Our aim is to show that drawing is a vital tool for learning, observation, thought, creativity and communication. Best of all it's accessible – at the end of our fingertips."

• Find out more about Make Your Mark on the Future and other events happening in SE1 as part of The Big Draw.