Boris Johnson, Mayor of London and chair of Transport for London, has voiced his opposition to a ban on cycling on the Thames Path along the South Bank. 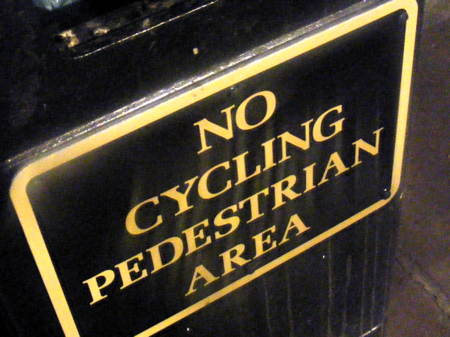 Last summer Lambeth Council published a draft South Bank and Waterloo Cycle Strategy which dealt with the vexed question of whether cyclists should be allowed to use the Thames Path along the busy stretch of waterfront from Lambeth Bridge to Blackfriars Bridge.

Green Party London Assembly member Jenny Jones recently tabled a question asking the Mayor of London whether he supported a ban on cycling on part of the South Bank.

"TfL does not believe that cycling should be banned along the South Bank," replied Boris Johnson.

"However, the decision on whether to ban cycling along stretches of the South Bank rests with the London Borough of Lambeth and private land owners within this area.

"TfL provided a response to the South Bank Employers' Group's cycling strategy for the area in September 2010.

"TfL's response referenced my target to increase cycling by 400 per cent by 2026, to improve cycle safety, and the importance of improving the permeability for cyclists in central London, including in the Waterloo area."

We asked Lambeth Council to clarify the current status of the draft cycle strategy. In a statement the council said: "The deadline for any consultation submission was the end of September and is as yet incomplete."

Last month the council erected 'no cycling' signs on the section of the Thames Path it controls between Westminster Bridge and Lambeth Bridge, close to St Thomas' Hospital, even though it has no power to enforce such a ban.

The council says that it is "monitoring the effectiveness" of the signs which were erected in response to complaints that "a small number of aggressive cyclists were spoiling it for the majority of sensible cyclists and pedestrians who use this section of the South Bank".

A council spokesperson said: "The signs are currently advisable [sic] but they allow the PCSOs that patrol the South Bank to ask cyclists to dismount in order to talk to them about considerate cycling."

The council says that a traffic regulation order (TRO) would be required to make the ban legally enforceable and that a full consultation would be carried out before such an order was sought.

"There seems to be a shortfall of ambition from many politicians and planners to see London have a child-friendly cycle route, free of motor traffic, linking the tourist attractions springing up all along the river," said Charlie Holland of Lambeth Cyclists.

"Some of the proposed replacement routes around the South Bank are totally unsuitable for novice cyclists. We'll be opposing this ban every inch."

What do you think?