Blackfriars Railway Station reopened to passengers on Monday morning after eight weeks of work to prepare for longer trains and the addition of a new Bankside entrance to the station later this year. 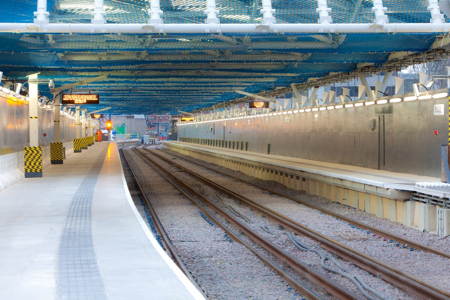 The new track layout will allow more services to run to and through central London in the future as part of the long-awaited Thameslink Programme.

The station will be ready to handle 12-car trains from December this year, along with the opening of a new station entrance on Bankside.

During the eight-week closure more than 1200 people together spent more than 400,000 man hours on activities such as demolition, bridge deck weather proofing, roof framework erection, the laying of track plus the installation of new signalling, telecoms and passenger information systems.

A key activity at this time was the track switch during the planned Christmas possession from 24 December 2010. Here the construction team worked around the clock to switch the running rail tracks, signals and other related infrastructure from the west side of the bridge to the east.

Work is now under way on the the western side of the rail bridge, strengthening it with a new bridge deck and then widening it with three new rows of rib arches to support two new bay platforms above that will accommodate longer terminating 12 carriage trains.

The work includes the partial demolition of some of the old columns of the former Blackfriars Railway Bridge that was removed in the mid-1980s.

"The reopening of Blackfriars station is a significant achievement, considering the importance of this to the route and the incredible amount of complex work that took place over the last eight weeks," says Jim Crawford, Network Rail's Thameslink Programme director.

"The new track layout, extended platforms and roof spanning the Thames help bring to life for passengers the benefits the station and the Thameslink Programme deliver. Across the entire programme over the next 12 months there is still a lot of work to be done, as we continue with enhancements and upgrades along the route."

Michelle Smart, customer service director for First Capital Connect which manages the station and operates the Thameslink route, said: "Passengers alighting at Blackfriars now have the first glimpse of the new platforms of this thrilling new station that is being built to accommodate our future capacity-enhancing 12-carriage trains.

"Network Rail has done well to complete this part of the project on time and I want to thank our customers for their patience during the eight-week closure."

Local politicians and businesses have led calls for the expanded station to be renamed Blackfriars & Bankside to reflect its unique cross-river location.