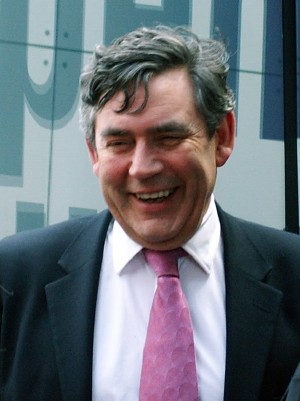 Gordon Brown pictured on a previous visit to SE1

The lecture series was established in 2007 during the celebrations of the 400th anniversary of John Harvard's birth in Southwark.

More than 900 people filled the The Old Vic which is a much bigger venue than the lecture series' previous home at the Unicorn Theatre.

Southwark Council leader Peter John, acknowledging that the theatre was just over the border in Lambeth, claimed the area as 'Greater Southwark'.

The former premier opened his address by speaking of "the great Labour leadership of Peter" and his councillors who won control of the borough last May.

"We are all proud of what they are achieving," said Mr Brown. "Southwark is a pioneer of new social policy ideas."

This year the lecture was also dedicated to Ted Kennedy who was described by Gordon Brown as someone who had done "more to pioneer social legislation" and had "changed America".

Turning to the economy Gordon Brown said that the growth of China could not be ignored and called on the government and European countries to think globally and not claim that economic problems could be solved alone.

"National rules, national regulations and national standards are not going to be enough when you have the global sourcing of goods and the global flow of capital. So we are trying to find national solutions for problems that can only be solved globally.

"You cannot solve the problem of bankers' bonuses only in Britain if every bank around the world is going to be paying bigger bonuses and attracting business from Britain to another country."

Later he said: "This isn't just a normal finacial recession we are coming out of. It's a major fundamental change taking place in this world. It cannot be met by ordinary measures where governments retreat into national solutions and do not understand that these are interconnected problems that can only be resolved by acting internationally."

The lecture was sponsored by the Fabian Society whose director Sunder Katwala chaired a question and answer session.

On arrival the former prime minister signed copies of his new book Beyond the Crash: Overcoming the First Crisis of Globalisation.

John Harvard was baptised in Southwark Cathedral in 1607 in the presence of his parents who ran an inn and a butcher's shop in Borough High Street. Eventually John emigrated to America with 400 books which became part of the university taking the Harvard name.

• The fifth John Harvard Memorial Lecture will be given by historian Simon Schama this September.