Historian Simon Schama delivered the fifth John Harvard Memorial Lecture at the National Theatre on Monday night. He spoke on the theme of toleration in the week of the tenth anniversary of the 9/11 terrorist attacks on the United States. 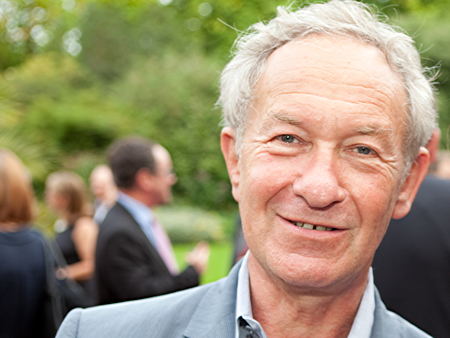 The John Harvard Memorial Lecture was established by Southwark Council in 2007 to examine Anglo-American links and to remember the man, born in Southwark 400 years earlier, who gave his name to what is now a world-famous university in Cambridge, Massachusetts.

This week's event was the second John Harvard Lecture to be held this year: in January Gordon Brown spoke at The Old Vic. Past speakers include BBC Radio 4's Justin Webb.

"We may be in Lambeth but our hearts are in Southwark," said council leader Peter John as he introduced the lecture held this year at the National Theatre on the South Bank.

Reflecting on the 9/11 attacks, Cllr John said that "the way in which we all live our lives has been altered by those events".

The council leader also welcomed to the event Miya Ando who designed the 'After 9/11' sculpture made from World Trade Center steel. Originally intended for installation in Southwark's Potters Fields Park, the artwork was this week unveiled by Boris Johnson in Battersea Park where it is on display for a month.

Professor Schama, who spent 13 years at Harvard, said that the university's benefactor "is a figure who is at once extremely famous and extremely obscure"; whilst everyone knows Harvard's name few people know much about the man who died of TB aged 31 and bequeathed his library of 400 books to what was then called New College.

He traced the story of the Southwark boy who left the "terror state" of 1630s England for a new life as a Puritan minister in Massachusetts.

"The search for freedom of conscience … was the reason there was an America," said Professor Schama.

"It is often forgotten that it is the failure of both gods – the capitalist god and the communist god – that made Al Qaeda possible in Afghanistan and elsewhere," he said.

Turning to the events of 11 September 2001, he said: "The greatest respect we can pay … is to turn grief into instruction."

Professor Schama called for a society that is "militantly tolerant" whilst avoiding "cultural self-congratulation".

The historian is an advisor to the 9/11 London Project which has promoted Miya Ando's artwork and developed an educational programme for schools. Southwark schools including Walworth Academy have already used some of the project's material.

In January Professor Schama was involved in heated exchanges with local residents and relatives of 9/11 victims when he spoke at a meeting in Southwark intended to make the case for bringing the artwork to Potters Fields Park.

Southwark Council had granted planning permission for the artwork but the Potters Fields Park Management Trust vetoed the proposal. The council leader has since joined the trust's board himself with the aim of exerting greater council control over the riverside green space between City Hall and Tower Bridge.