"I am thrilled to be with you in this year to celebrate gloriously the four hundredth anniversary of John Harvard's baptism," Revd Professor Peter Gomes of Harvard University told the Sunday morning congregation in Southwark Cathedral. 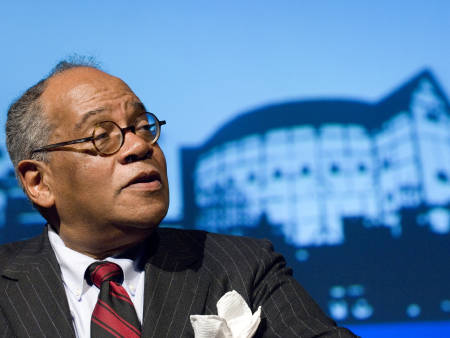 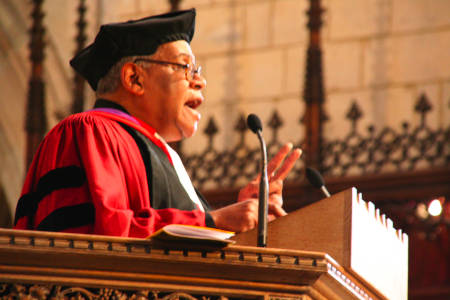 "We can never be too grateful for being his heirs in this world."

John Harvard was baptised in the parish church known today as Southwark Cathedral and Professor Gomes told those listening to him in the packed nave that they were always welcome at Harvard "by being parishioners of this parish" just as Harvard graduates are always welcome in Southwark because of the connection.

"We owe you and your predecessors everything" he said referring to John Harvard's decision to leave his Southwark inheritance of money and books to a new college in America where he had made his home.

Taking The abolition of the slave trade in the British empire 200 years on as his theme, Prof Gomes told his audience that anniversaries "have the power to engage and enliven the present for the future".

Professor Gomes – who is recognised as one of the USA's best preachers and public speakers – received a standing ovation at the end of his lecture and fielded questions on a wide range of topics.

Councillors and council staff were joined by representatives of Southwark community groups and London-based Harvard alumni for the lecture. Guests included Harvard alumnus C Boyden Gray, US ambassador to the European Union, and Richard Taylor, father of murdered Peckham schoolboy Damilola Taylor. The Damilola Taylor Trust is the Mayor of Southwark's charity for the current year.

Council Leader Nick Stanton invited Prof Gomes to give the lecture during his two visits to Massachusetts this year.

John Harvard's family owned the Queen's Head inn on Borough High Street. The building on the site of the inn now occupied by solicitors Mackintosh Duncan.

"The annual lecture is one way we can celebrate that link while also getting local people interested in issues which are of relevance to the complex society we live in now. It gives local people the opportunity to hear international speakers and I was delighted to see young people there."

The lecture marks the start of a planned 12-year programme of cultural, educational and commercial links between Southwark and Massachusetts in advance of the 400th anniversary of the sailing of the Mayflower from Rotherhithe to Plymouth Massachusetts in 1620.

In April Cllr Stanton was among the guests at the opening of a new student bar at Harvard University called the Harvard Queen's Head in honour of the former Southwark tavern of that name.

The actual baptism anniversary is on Thursday 29 November when the choir of Emmanuel College Cambridge, where John Harvard was a student, will join Southwark's Great Choir to sing Evensong at 5.30pm in Southwark Cathedral.

A copy of the Harvard baptism entry in the Southwark parish register is on show outside the cathedral's Harvard Chapel.

The Harvard Chapel window, depicting the arms of Harvard and Emmanuel College Cambidge, was given on the 300th anniversary by the US Ambassador who on that occasion declared: "We reiterate the hope that all Harvard men will come to the rock from which they were hewn and to the hole of the pit from which they were digged to the place where the founder of this great University spent much of his youth, and so add more links which bind this old country with the new."

• Earlier this month the Dean of Southwark, the Very Revd Colin Slee, was guest preacher at Harvard's Memorial Church. During his visit a tablet was unveiled – a gift of the dean and chapter of Southwark Cathedral and the master and fellows of Emmanuel College Cambridge – recognising the 400th anniversary of the baptism of John Harvard.