Lambeth Council and members of campaign group Lambeth Cyclists will this month hold awareness sessions on the South Bank to encourage cyclists and pedestrians to be more aware of each other. 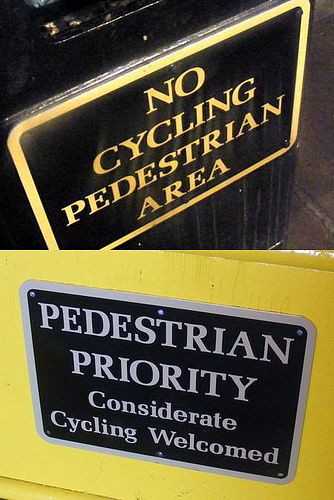 Lambeth Council spent Ł2,600 on 'no cycling' signs which were removed after a couple of months

The awareness sessions follow the council's U-turn on plans to ban cycling on the riverside path between Lambeth Bridge and Westminster Bridge.

Last autumn 'no cycling' signs were installed on the path but after pressure from cycle campaigners and the Mayor of London they were replaced by signs that make it clear that considerate cyclists are welcome to use the route.

During the sessions members of Lambeth Cyclists will join council staff and police to stop and talk to cyclists on who are spotted riding fast or too close to pedestrians on the Thames Path.

They will be encouraged to slow down and think about the safety of those on foot. Police officers will also be stopping drivers on Lambeth Palace Road, which is a designated cycle route, if they block the advanced stop lines for cyclists or are spotted using mobile phones or driving dangerously in other ways.

The council says that the South Bank awareness sessions follow on from a campaign on Clapham Common which sought to ease tensions between pedestrians and cyclists.

"We want walking and cycling in Lambeth to be as attractive as possible and the way we share our public spaces and thoroughfares is an important part of achieving this," says Cllr Nigel Haselden, cabinet member for regeneration and transport.

"This campaign encourages less vulnerable road users to consider the safety and well-being of the more vulnerable, whether they are cyclists, motorists or pedestrians.

"This can be particularly important in parts of the South Bank where cyclists and pedestrians share a busy and confined space. Our message here and in Clapham is 'Pedestrian Priority – Considerate Cycling Welcomed'.

"The sessions on Clapham Common were very successful and I'm really glad that we have Lambeth Cyclists working with us on this latest project, as their support is invaluable."

The sessions will be held between 4pm and 7pm on Monday 28 March, Thursday 14 April and Monday 18 April. There will also be a morning session on Friday 8 April between 7.30am and 10am.