A new recycling bin for small electrical appliances such as hairdryers and irons has been installed outside Mint Street Park by Southwark Council and Veolia Environmental Services. 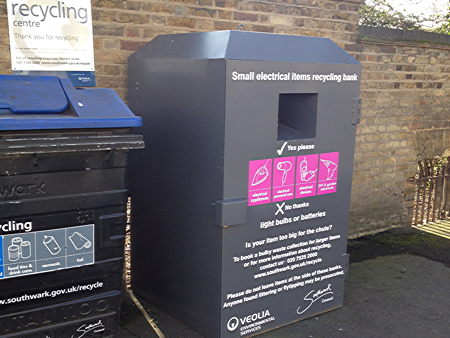 Southwark's waste contractor Veolia this week announced that it has placed six banks for waste electrical and electronic equipment (WEEE) across the borough.

The Mint Street Park recycling bank is located on Southwark Bridge Road opposite the Great Guildford Street junction (close to the Welsh Chapel).

The new bin at Southwark Bridge Road is the second such WEEE bank in SE1: a similar recycling bin was installed in Baylis Road at Waterloo by Veolia and Lambeth Council last spring.