Developer Archlane has launched a public consultation on its plans to refurbish Sea Containers House to create a new hotel, shops and offices on the South Bank. 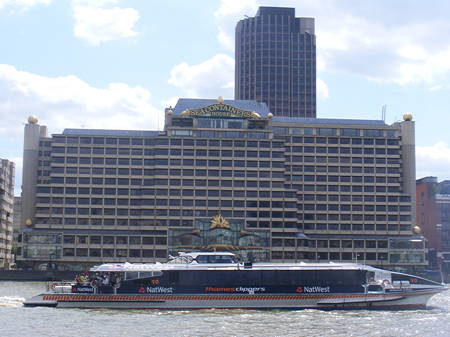 The complex was built as a 750-room hotel in the mid 1970s by the Anglo-Spanish Melia Buckley consortium but was turned into offices before it opened.

Shipping firm Sea Containers bought the building from receivers for £9 million in 1979. The freehold was aquired by Archlane in 2003.

Now Archlane has commissioned TP Bennett to design plans for redevelopment, including a four-star 268-room hotel in the south wing.

New shops and restaurants would be created on the Thames Path frontage replacing the current office windows. A new north-south pedestrian route between the Thames Path and Hatfields in the gap between Oxo Tower Wharf and Sea Containers House is also promised.

A new 9-storey office building – with shops at ground level – is planned for the car park area fronting Upper Ground.

The developer is holding public exhibitions of the proposals in the Sea Containers House car park on Thursday 12 May (2pm-8pm) and Saturday 14 May (10am-3pm).

A planning application is expected to be submitted to Southwark Council in May.