Car-shaped bike rack migrates from Lower Marsh to The Cut

A temporary cycle rack which fits 10 bicycles in the space that one car would normally occupy has moved to The Cut after a month in nearby Lower Marsh. 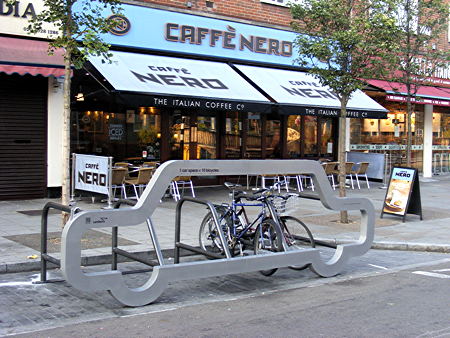 The car-shaped rack, created by Cyclehoop, is being trialled in various locations by Lambeth Council with the view to a permanent installation somewhere in the borough.

Two cyclists who left their bikes outside Waterloo Health Centre in Lower Marsh on Thursday will have found their bikes relocated a quarter of a mile away to the rack's new home outside Caffe Nero in The Cut.

A note was left on a nearby lamppost to tell the returning cyclists where their bikes had gone.

The car bike rack was originally commissioned by the London Festival of Architecture and has since been used to provide temporary bike parking space at events around the capital.

Cyclehoop also created the L-A-M-B-E-T-H cycle rack at the borough's boundary with Southwark on Waterloo Road.

The firm's original product – a hoop for securely locking bicycles that attaches to existing street furniture – can also been seen in The Cut outside Southwark Underground Station.