Business secretary Vince Cable visited London South Bank University on Tuesday for the launch of the Nathu Puri Institute for Engineering & Enterprise, seth up with a £1 million gift from the businessman. 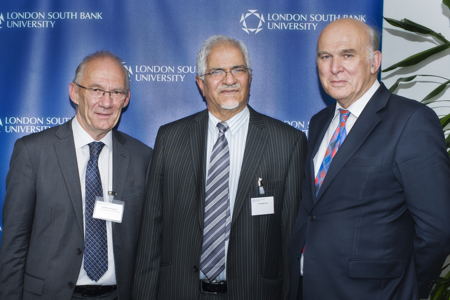 Nathu Puri studied at what was then the Borough Polytechnic when he first came to the UK from India in the 1960s. He has said that those eight or nine months of study "changed his life" and he has been a long-standing supporter of LSBU which presented him with an honorary doctorate in 2007.

His company, the Purico Group, is active in a wide range of sectors across the world. Purico's interests in the UK include paper, polymers and construction. The firm also owns the Grim's Dyke hotel in Harrow and the Newtown shopping centre in Birmingham.

"The establishment of this Institute shows that philanthropic donations can lead to great things for a university, its students and the economy," said Vince Cable. "This new facility gives students the means to transform their abilities in science and engineering into dynamic businesses for the future.

"In recent years, universities have improved their fundraising efforts greatly and we outlined a number of measures in the Budget to encourage further donations, including a ten per cent cut in inheritance tax for estates leaving at least ten per cent to charity."