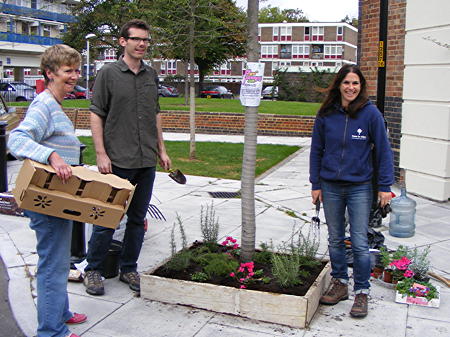 The head of the Kennington-based tree charity attached a plaque to a young plane tree on Saturday morning to record that the planting and maintenance of the tree had been funded by donations from friends and neighbours of nearby resident Clare Armstrong.

Over a thousand pounds was raised at her birthday party in July 2009.

During the visit the charity presented plants for new raised tree pits in Spurgeon Street which were being built during a Pimp Your Pavement morning.

The activity, led by guerrilla gardener Richard Reynolds, attracted further support and promises of donations from other residents who expressed delight at the greening of the street.