Blackfriars station signs to include ‘Bankside and South Bank’

Platform signs at the new cross-river Blackfriars Station will include the words "for Bankside and South Bank", Network Rail has confirmed. 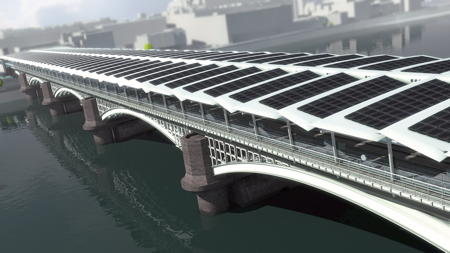 This summer Network Rail held a public consultation on a possible name-change for the railway station. Currently only accessible from the north bank of the river, a new entrance to the station is due to open on Bankside next month.

Network Rail says it received 857 responses to its questionnaire which asked passengers and residents about various options for a new name (subject to funding) and possible new signs to complement the existing London Blackfriars name.

On the question of signage, just over 25 per cent backed 'London Blackfriars (for Bankside and South Bank)' with nearly 24 per cent preferring "for South Bank and Bankside".

The campaign for a name change had been led by Simon Hughes MP and Caroline Pidgeon AM.

"While I would have preferred a complete change of the station's name this is still a great step forward for the Bankside area," says Caroline Pidgeon, a Liberal Democrat member of the London Assembly.

"This new signage can only help ensure far more people are aware of the wide range of venues in the Bankside area, from the Globe Theatre through to the Tate Modern.

Simon Hughes MP added: "The announcement from Network Rail about the name and signs for the new Blackfriars Station is good news for all who have campaigned for Bankside to be given a higher profile on the transport maps of London.

"Bankside is the historic cultural heart of London attracting millions of visitors a year.
"It is therefore entirely right that the new Blackfriars station, which will be accessible from the south side of the Thames for the first time, makes clear that this is the stop for Bankside and the South Bank."

First Capital Connect, which will manage the new station, has also confirmed that Oyster card holders will be able to use the Bankside entrance to cross the river in order to board a tube train at Blackfriars Underground Station on the north bank.

"Ticket holders will be able to use the station bridge to cross the river but if you are using a pay as you go Oyster card you must catch a train from Blackfriars with either National Rail or London Underground to avoid a maximum journey penalty fare," says the train operator's Thameslink Programme website.

A date for the opening of the Bankside entrance to Blackfriars Station has not yet been confirmed. The national railway timetable changes on Sunday 11 December but it is not yet clear whether the new Blackfriars ticket hall will open on this day.

Although the station is expected to open next month, work will not be completed until spring 2012.