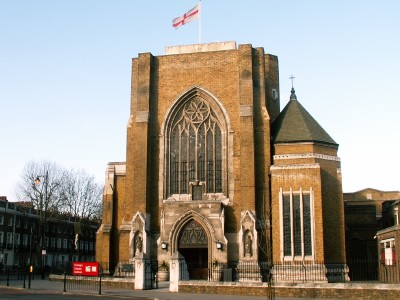 The principal celebrant of the Mass was the Archbishop of Southwark, the Most Revd Peter Smith.

To demonstrate the diversity of Southwark's population, intercessions were offered in Yoruba, Spanish, Tagalog, Urdu, Polish and English.

The service marked the broadcast premiere of Missa Sancti Nicolai by composer Nicholas O'Neill who served as the cathedral's organist for 10 years until 2010.

Also broadcast for the first time was James MacMillan's motet In splendoribus.

The final hymn, O come all ye faithful, was translated into English by Frederick Oakley who was a curate at St George's from 1847 to 1855.

Bermondsey & Old Southwark MP Simon Hughes was among those in the large congregation. Those attending the service had been invited to wear national dress.

It is the third time in the past decade that the BBC has broadcast Midnight Mass from St George's. In 2003 the service was carried on Radio 4 and the following year it was televised by BBC One.