A new St Hugh's Church is to be built on the Rainbow Building site in Crosby Row as part of a residential development. 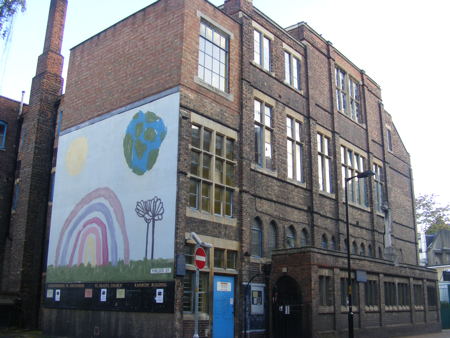 Southwark Council has given the go-ahead for a scheme to include 22 flats above a new ground floor church for the Anglican congregation.

The Rainbow Building was used by local charity Charterhouse-in-Southwark until its closure in 2008.

The congregation of St Hugh's has continued to worship in part of the building. The complex has now been sold to Sherwood Street Ltd.

The redevelopment scheme was approved by Bermondsey Community Council during a meeting at the Ellen Brown Bermondsey Play Centre in Grange Road on Wednesday evening.

Although the Rainbow Building is in Grange ward some of its nearest neighbours live in Chaucer ward.

Appearing before the community council, Chaucer ward councillor Tim McNally gave nine principal objections including loss of privacy to neighbours, loss of light, inadequate cycle parking, segregation of private units from the affordable housing and the level of social housing.

Cllr Nick Stanton, having at first questioned the failure to meet the 35 per cent social housing target, described the affordable housing as "fairly good" and especially welcomed the family sized units.

Cllr Linda Manchester criticised the separate lifts and other facilities for private and social rented accommodation.

After concern was raised about use of the church late at night for services or functions it was agreed that all events should end by 10pm on weekdays and 9pm on Sundays and bank holidays. Earlier Cllr Paul Kyriacou, from the chair, had pointed out that this would require the church to seek council permission for Christmas Midnight Mass.

However, the churchwardens, who were present, welcomed the scheme's approval despite the unusual notice arrangements required for Christmas and New Year's Eve services. The present church is expected to hold its last service in July. Contractors will begin demolition in August.

The St Hugh's congregation is planning to worship at nearby St George the Martyr until the new church is ready for occupation in autumn 2013.

The Rainbow Building with its church opened in 1898 as part of Charterhouse-in-Southwark which had been established by old boys of Charterhouse School in Godalming to support poor people in Bermondsey.

The upper floors had a gymnasium used more recently for five-a-side football and rooms where a parent and toddlers group, a youth club and pensioners met.

• One of the other former Charterhouse-in-Southwark buildings – 40 Tabard Street – is now occupied by the London Christian School which has recently applied for planning permission to build a rooftop playground.