Cyclists in the Bankside area were able to experience what it's like to sit in the cab of a heavy goods vehicle on Wednesday morning outside Tate Modern. 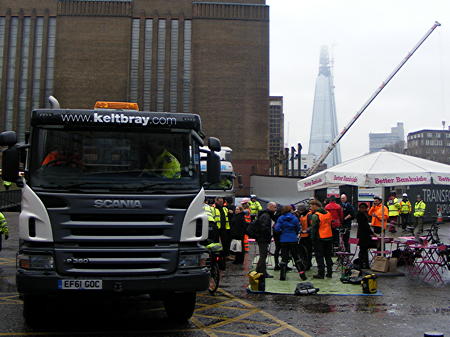 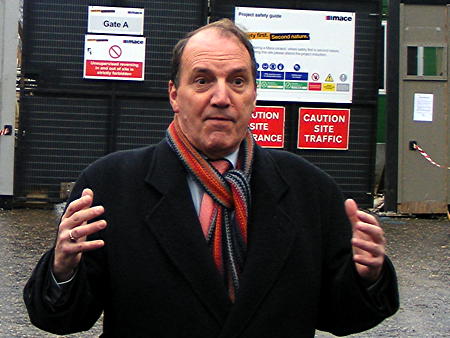 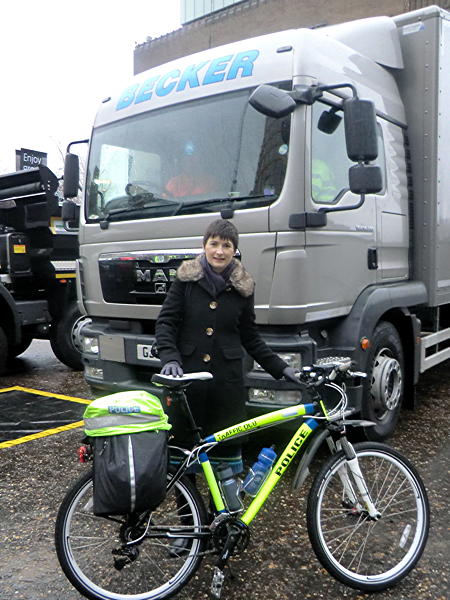 Lib Dem London Assembly member Caroline Pidgeon also dropped in at the event on her way to City Hall. She was accompanied by Cathedrals ward councillor Geoffrey Thornton

The 'Lorries for Savvy Cyclists' event was organised by Better Bankside in partnership with Southwark Council, Tate Modern, Mace, Balfour Beattty, the Metropolitan Police and Keltbray.

Bermondsey & Old Southwark MP Simon Hughes was one of those who took advantage of the opportunity to learn about cycle safety from a lorry driver's perspective.

The Metropolitan Police regularly organises 'Exchanging Places' events so cyclists can understand what lorry drivers can and can't see from their cab. This was the third event of its kind held in the Bankside area.

Mr Hughes spoke about the need for all groups of road users – cyclists, drivers and pedestrians – to recognise that they are not perfect and to do better to work for safety.

"The public authorities can do better because we clearly haven't yet managed to produce the sort of safe city that's friendly to pedestrians and cyclists that we should do and need to do," he said.

"You all know why this is quite an acute issue in Southwark. As in other parts of inner London, we have had regular serious injury and fatality on local streets of – normally – young and talented people who are cycling.

"The last was a young woman from Guernsey, living in Peckham, cycling up Tower Bridge Road and caught by a larger vehicle seeking to turn left into Abbey Street and Long Lane, and killed as a result.

"I was with her family in December ... and they were being amazingly brave but also amazingly constructive about saying 'let's turn this to good effect'.

"There have been others. I've been to too many events at too many roundabouts and crossings where the legacy is flowers or memorials.

"This is a really important issue for all of us."

The MP urged local residents and workers of all political persuasions to make sure that road safety is a key issue in this year's elections for Mayor of London and the London Assembly.

"Cycle safety really matters at Southwark and by offering our support to this awareness event we are demonstrating a strong commitment to this transport issue," said Cllr Barrie Hargrove, cabinet member for transport, environment and recycling.

"I strongly recommend that cyclists living in our borough take the opportunity to increase their knowledge on cycle safety and receive useful tips and advice."

• Next week Southwark's Council Assembly will hold a themed debate on the environment. Councillors will discuss how the authority can encourage more walking and cycling in the borough and public comments are invited.