Family and friends of Ellie Carey were joined by politicians, local residents and London cyclists at the junction of Abbey Street and Tower Bridge Road on Wednesday night to remember the 22-year-old student who died there on 2 December. 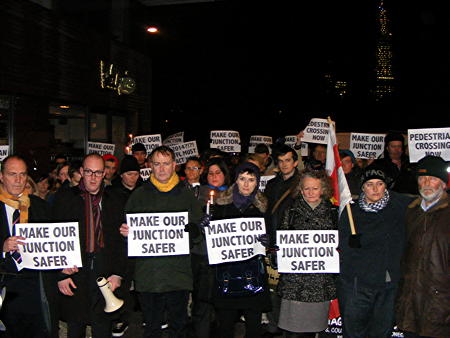 Ellie Carey died from head injuries after her bicycle collided with a lorry at the Bermondsey junction as she cycled to London Metropolitan University from her home in Peckham.

Ellie's father Allister and brother Peter travelled from Guernsey to be present at the gathering.

Grange ward councillor Mark Gettleson, who has been campaigning for safety improvements at the junction for more than a year, introduced the event and led a minute's silence to remember Ms Carey.

Simon Hughes MP then addressed the crowd and expressed the hope that Ellie's death would lead to much good.

"We have had far too many unnecessary cyclists' deaths in London," he said.

The MP added: "Many of us cycle often and we know London needs to be safer."

He urged politicians of all parties to work with the London Cycling Campaign and other to ensure that road safety is a key issue during next year's elections for the Mayor of London and London Assembly.

"We cannot have more years in this capital city where so many young people have their lives ended – not by what they do but by what other people do which impacts on them."

Earlier in the day the London Assembly unanimously passed a motion which – among other things – called on the Mayor of London and Transport for London to bring forward proposals to improve cycle safety at the junction of Tower Bridge Road and Abbey Street.

The Conservative group had initially indicated that it would oppose the motion. Assembly member Andrew Boff described the motion as "reactionary" and warned that it would send a message to the public that cycling in London is unsafe.