Sainsbury’s gets go-ahead for convenience store in The Cut

Lambeth councillors have approved three planning applications which will clear the way for Sainsbury's Local to open in The Cut. 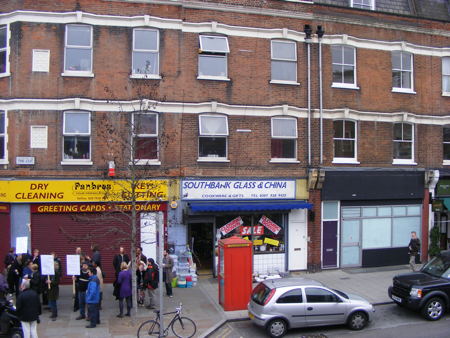 Sainsbury's first announced its intention to open a store in The Cut last September. The new supermarket will be created by combining three shop units opposite the Young Vic.

The supermarket doesn't require planning permission to use the former Panbros and Southbank Glass & China premises as a supermarket but it does require consent for a new shopfront and for change of use in relation to the former launderette. The company also sought permission to install new air conditioning and condenser units.

Bishop's ward councillor Diana Braithwaite had requested that the applications were referred to the committee so that concerns about noise and disturbance to local residents could be aired in public.

The proposed shop is on the borough boundary between Lambeth and Southwark and Cllr Braithwaite told the committee that she had worked with councillors representing Cathedrals ward to help address concerns from residents on both sides of the border.

"We do regret the loss of the three units that have gone – but they have gone and ... Sainsbury's Local will be a great anchor in our shopping centre."

He also welcomed the prospect of a new ATM as Waterloo has lost several cash machines due to the closure of local bank branches.

However, he highlighted late-night delivery problems outside the nearby Sainsbury's Local in Waterloo Road as well as fears that Mitre Road residents were likely to be affected by noise and smells.

Cllr Braithwaite, who also welcomed Sainsbury's arrival in The Cut and the ATM facility, said that noise conditions for condenser and air conditioning units were "not robust enough".

Members agreed that a strict noise level limit should be imposed and this was accepted by the Sainsbury's representative present.

There will be no night-time deliveries by large lorries to the new Sainsbury's Local.

It has been agreed that large container vehicles delivering to Sainsbury's on the corner of The Cut and Short Street will be restricted to the daytime hours of 10am to 4pm.

Newspapers and bread will arrive by van earlier in the day.

However, in order to accommodate the loading bay outside the store in The Cut there will be a relocation of pay and display car parking spaces to replace residents' parking spaces in Short Street.