The former oil tanks of Bankside Power Station will this summer host a 15-week festival of live art, performance, installation and film art as work continues on the construction of the modern art gallery's extension. 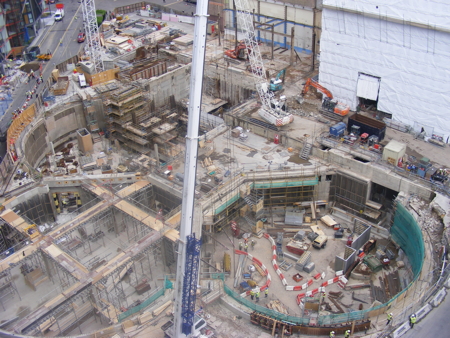 The oil tanks pictured in May 2011

To be known as the Tanks, the spaces will host a programme of events and activities between 18 July and 28 October this year. Tate hopes to offer a mix of ticketed events and installations that can be enjoyed by the casual visitor.

There are three tanks, two of which will be open to the public with the third used for back-of-house facilities.

In the autumn the builders will move back in but Tate says that the Tanks will continue to host artistic programmes during the construction of the new building.

"Over the past ten years our experience in using the Turbine Hall for live events has demonstrated both the potential for Tate and an appetite on behalf of the audience," says Tate Modern director Chris Dercon.

"By having these new spaces we can offer a different pace in our programming so that performance, sound, moving images and participation – art in action – can carry as much weight as anything else we are doing.

"The Tanks are a new type of public space for art which is about social play.

"They provide the foundation for what we hope to be a revolutionary programme for the new Tate Modern."

This summer's limited opening of the Tanks has been timed to coincide with the London 2012 Festival which serves as the finale of the Cultural Olympiad.

Tate director Sir Nicholas Serota confirmed this week that the gallery has raised more than Ł160 million of the Ł215 million costs of the new Herzog and de Meuron-designed building. Tate has allowed four years for the building to be completed but at Monday morning's press conference Sir Nicholas was optimistic that construction could be finished sooner than that.