Southwark's planning committee has unanimously approved plans to transform part of the Imperial War Museum in time for the centenary of the First World War in 2014. 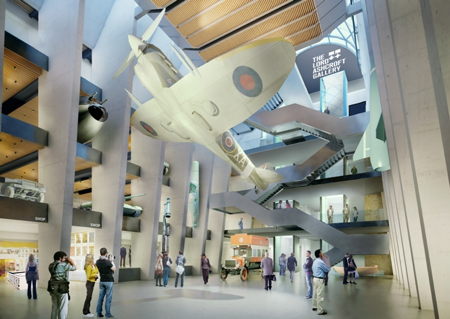 Artist's impression of the reconfigured atrium 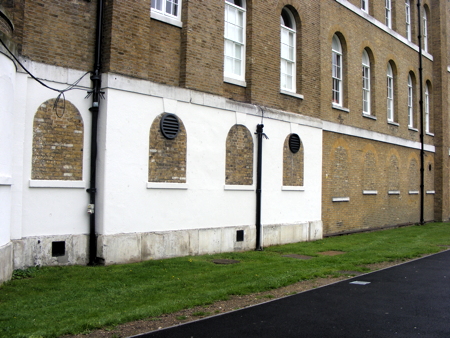 These windows will be unblocked to create a new parkside location for the museum cafe. The strip of grass will be lost.

The museum proposes to lower the floor of the building's atrium to basement level and to relocate its cafe to the west side of the building, opening out onto Geraldine Mary Harmsworth Park.

The works are the first phase of a much larger masterplan drawn up by Foster & Partners.

The Friends of Geraldine Mary Harmsworth Park and the Waterloo Community Development Group have objected to plans to pave over a strip of grass outside the museum to create a new cafe terrace for up to 92 covers.

13 bricked-up windows on the museum's west side will be unblocked to create a new connection between the building and the park at ground level.

"The grilles over the new windows are based on the original grilles from Bedlam Hospital which I personally find a bit spooky but will look really cool and will be relevant to the listed building," said design and conservation officer Norman Brockie at Tuesday night's meeting.

Describing plans for the atrium, he said: "We consider this structure to be a very exciting proposal for the museum.

"The current space is quite poorly defined and we think this will provide a real focus – a real heart – to the museum and a very positive architectural statement that will enhance greatly the museum and its image worldwide."

Project director Ann Carter told the committee: "Imperial War Museum London is the flagship branch of Imperial War Museums but it has received the least investment over the last decade and we are now facing a whole series of issues with the site: we've got poor circulation, the museum is an island within the park and has no relationship with it and ... our galleries are quite muddled."

"Most importantly, this phase of the project allows us to deliver new First World War galleries in time for the centenary in 2014. The museum was founded during the Great War and it's really important to the nation and the world."

Under questioning from councillors Ms Carter revealed that the museum expects 1.3 million people to visit the venue during centenary year in 2014.

Michael Jones from Foster & Partners said: "For the first time you will be able to see the objects in the atrium space in the context of the galleries to which they relate. They will no longer be segregated. Reconfiguring the atrium is what has delivered that."

He added that the proposals would "recreate the historic link between the park and the museum, and put the museum back in its setting so it's not an island any longer, it's a museum in a park. That is a very key aspiration."

He added: "One of the main things that the museum will do in future is to deliver the collection chronologically.

Ms Carter rejected fears from the operator of the existing cafe in Geraldine Mary Harmsworth Park – and the borough's parks department – that the relocated IWM cafe could threaten the future of the established park cafe and lead to the closure of the public toilets which are supervised by cafe staff.

"The offer in the park cafe and the museum are very different things," she said. "We share the business that comes into the park and we don't see that changing ... There's business for everybody."

Cathedrals ward councillor Geoffrey Thornton addressed the committee to voice his support for most of the museum's plans but to register the concerns of the park's Friends group about the loss of green space.

"There is an anxiety that this space is gradually being eroded by stealth through successive developments," he said.

"It is, as a park, relative to all other parks across the borough and central London, more visited per square metre than any other park. It's got six to eight times the number of visitors per acre than Hyde Park receives."

Cllr Thornton added: "This is an area of one of the greatest deficiencies of open space so it is literally a case of every square metre being fought over and that's what it has come down to."

The committee voted unanimously to support the museum's proposals.

IWM London is expected to close to visitors for the first half of 2013 to allow building works to be carried out.

Last month the Duke and Duchess of Cambridge visited the museum for a reception in support of the fundraising appeal for the works.