Southwark Cathedral's Diamond Jubilee window has been dedicated by the Bishop of Southwark, Rt Revd Christopher Chessun, in the presence of a large congregation. 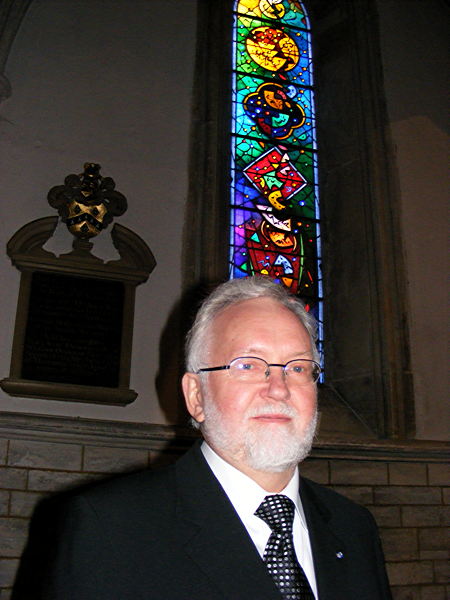 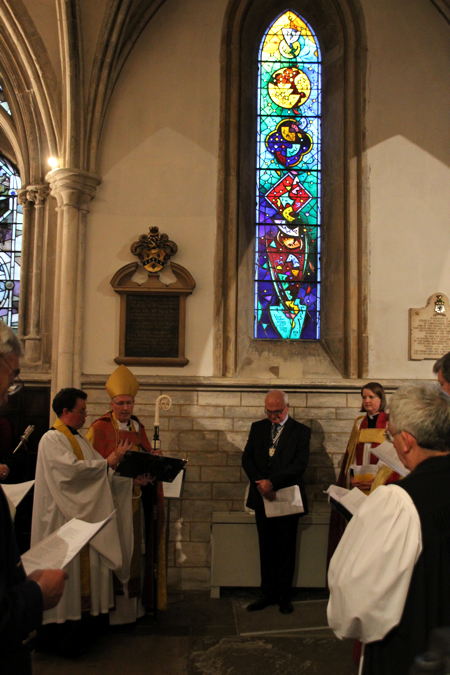 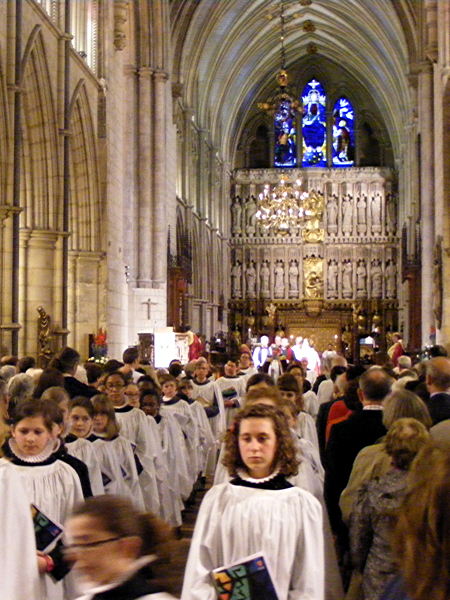 During the service the cathedral's great choir (comprising men, boys and girls) sang a number of anthems with royal connections

"It looks exactly as I hoped it would look," said the window's Icelandic artist Leifur Breidfjord, speaking earlier in the day.

"It is a very important window for me. When I got this commission I was very proud and so decided to do this all myself: full designs, full size cartoon, selecting the glass, cutting the glass, painting it, leading it and and puttying."

When Leifur Breidfjord first came to look at the space with its plain glass he started sketching and, he recalled, got the concept for the design right away.

The idea of a Diamond Jubilee window had been raised in January 2010 by the late Dean Colin Slee when dining at nearby Glaziers Hall. The Glaziers' Company's charity offered to fund the project and a competition was organised to find an artist.

In his sermon at Sunday's Choral Evensong the Dean of Southwark, the Very Revd Andrew Nunn, explained that "the task, given to the artists invited by our generous neighbour and donor, the Worshipful Company of Glaziers and Painters of Glass, was to submit a design which celebrated the concept of majesty that we find exemplified in the Queen and celebrated in the church".

The Master of the Glaziers David Ingmire arrived at the cathedral direct from the Thames Diamond Jubilee Pageant in which he had been rowed in the Company's cutter The Master Glazier.

"The dedication of the window by the Bishop of Southwark at such a joyful moment in national and local celebrations enables us to give thanks to God, not only for Her Majesty's remarkable reign, but also for the enduring link between our company and the cathedral," said Mr Ingmire who had brought his newly-born grandson with him for the occasion.

The window, in the 13th-century retrochoir, includes the words 'Vivat Regina!' and the service opened with the cathedral's combined choirs singing 'Vivat Regina' from the Coronation introit I was glad by Hubert Parry.

"We have no other window like it in the cathedral," said the Dean. "It completes the range of windows in the retrochoir which have almost become in themselves a history of stained glass over the last hundred years.

"Even on the darkest day it shines brilliantly, sucking every drop of light and energy from the sun and projecting it into the calm space of the most ancient part of this cathedral church."

The Dean spoke of the glass prisms embedded into the window allowing for "cascading colours from heaven to earth" which he called "a powerful statement".

The first lesson, read by Glaziers past master Phillida Shaw, was from Ezekiel and, appropriately for the weather, began with the words: "As I looked, a stormy wind came out of the north..."

Choral Evensong had been timed to start immediately following a fly past but this was cancelled due to sudden heavy rain and poor visibility. The top of The Shard was lost in mist as residents, guests and visitors made their way to the cathedral.

• On Thursday evening the cathedral will host Southwark's Diamond Jubilee Civic Service in the presence of Princess Alexandra.