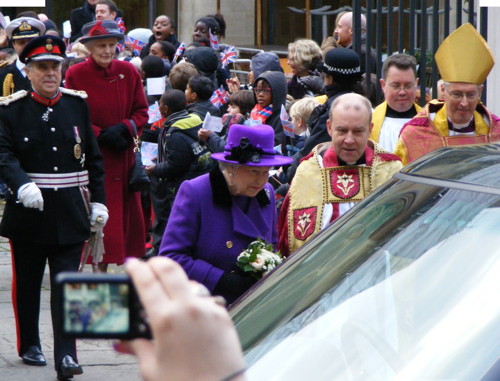 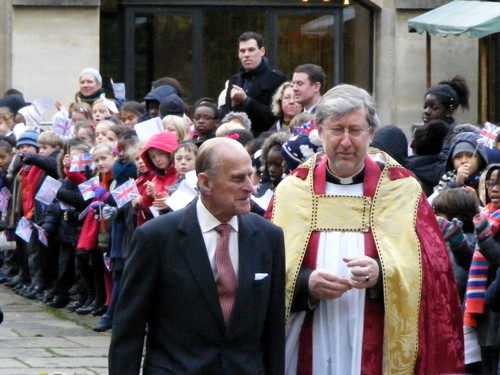 The Duke of Edinburgh with Canon Bruce Saunders, Sub Dean of Southwark 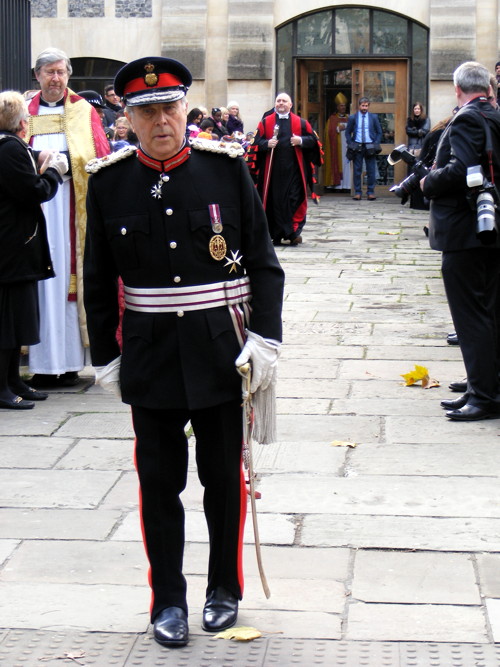 The visit on Thursday morning came the day after the couple's 66th wedding anniversary. Among those visiting the Queen at Buckingham Palace on the day was Archbishop Desmond Tutu whose name has been given to a room in the cathedral.

At The Shard The Queen was welcomed to Southwark by the mayor Cllr Abdul Mohamed before meeting local people employed in the building including those recruited through The Shard's apprenticeship scheme.

The royal party also met Riverside Primary School pupils, Aylesbury Estate residents and Borough Market traders who presented the Queen with a hamper of market produce. The gift was delivered to The Shard by a Better Bankside cycle freight vehicle.

Her Majesty and the Duke of Edinburgh were accompanied on the tour by Irvine Sellar, developer of The Shard and Southwark Council leader Peter John.

"It was a tremendous privilege to host Her Majesty the Queen and His Royal Highness the Duke of Edinburgh and tell them about the destination we are developing," said Irvine Seller afterwards.

"Our vision for The Shard and London Bridge Quarter began 14 years ago with the objective to create a new business and cultural hub, in the heart of the world's greatest city."

The Queen asked Mr Sellar to point out the part of the skyscraper where Prince Andrew had abseiled last year.

The royal couple drove to Southwark Cathedral by way of Duke Street Hill and Tooley Street to be greeted at the Millennium Courtyard by the Lord Lieutenant who had walked ahead in full uniform with sword through Borough Market from The Shard.

Pupils from the Cathedral School in Redcross Way cheered and waved homemade flags as the Queen and Duke of Edinburgh entered the north door with the Dean the Very Revd Andrew Nunn and Bishop of Southwark the Rt Revd Christopher Chessun.

The Chapter was presented in Lancelot's Link before the royal guests entered the church where chairs had been arranged in collegiate style with a red carpet laid down the main aisle.

After the national anthem had been sung the royal party moved down the church whilst the Great Choir sang an anthem from the Choirbook for the Queen which was launched at the cathedral during Jubilee Year.

This was the first time that the Queen had been able to view the cathedral's Diamond Jubilee Window which was dedicated on the day of the Jubilee River Pageant. Her Majesty met the window's artist Leifur Breidfjord who is from Iceland where his window designs are featured on this year's Christmas stamps.

Among others presented was the master of the Worshipful Company of Glaziers Michael Broadway, who with colleagues had walked from nearby Glaziers Hall, and Fabric Advisory Committee chair Canon Charles Pickstone.

The Queen and Duke also met head broderer Mary Howell who with a team is working on new vestments featuring references to the places in the Southwark Diocese.

The royal party left the church as the choir sang The Lord bless you and keep you by John Rutter. The school presented the Queen with a posy.

Although the Queen and her husband had arrived together in the Royal Daimler, complete with Royal Standard flying, the departure was made in separate LandRovers.

"We are delighted that Her Majesty has now seen the window which we have installed in her honour," said Very Revd Andrew Nunn.

"It is a great privilege that we have been able to do this and we are pleased that Her Majesty and His Royal Highness were able to spend time with us and also see the work on the Jubilee Copes."

For the Duke of Edinburgh this was his second visit to Southwark in a week. On Tuesday he performed the official opening ceremony for the Sam Wanamaker Playhouse at Shakespeare's Globe.

• Southwark Cathedral will be the subject of an episode of BBC Four's Cathedrals mini-series to be shown on BBC Four on Tuesday 26 November at 9pm.