Deputy prime minister Nick Clegg dropped in at the new Premier Inn hotel in Great Suffolk Street on Wednesday morning as he prepared to give a speech about youth unemployment. 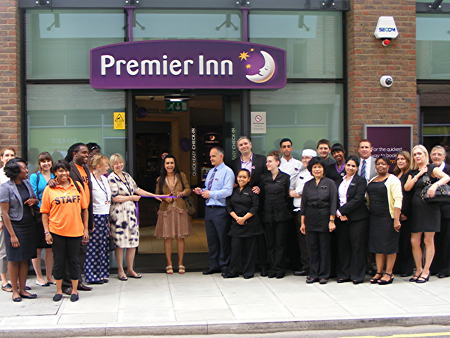 The new hotel, which labours under the name Premier Inn London Southwark (Tate Modern), has been part of a Whitbread group initiative which has seen 29 unemployed Londoners recruited via JobCentre Plus.

The Liberal Democrat leader visited the hotel en route to deliver a speech at the Confederation of British Industry's jobs summit on youth unemployment.

Whilst at the hotel Mr Clegg was interviewed by Sky News about his proposals for reform of the House of Lords.

Later in the day the hotel hosted a ribbon-cutting ceremony to mark its partnership with local charity Blackfriars Settlement.

Staff from the new hotel spent a day spring-cleaning at Blackfriars Settlement as part of their induction process before the first guests arrived – and there are more plans for the hotel to work with the charity in the months ahead, including offering advice on careers in the hospitality industry to local young people.

The 122-room hotel opened last month and is already proving popular. It is Premier Inn's fifth hotel in SE1. A sixth hotel opens early next year in Waterloo.