Plans to redevelop the Lambeth Mission & St Mary's building in Lambeth Road with a new Methodist church and a 12-storey Premier Inn hotel have been approved by a planning inspector who has overturned Lambeth Council's decision to veto the scheme. 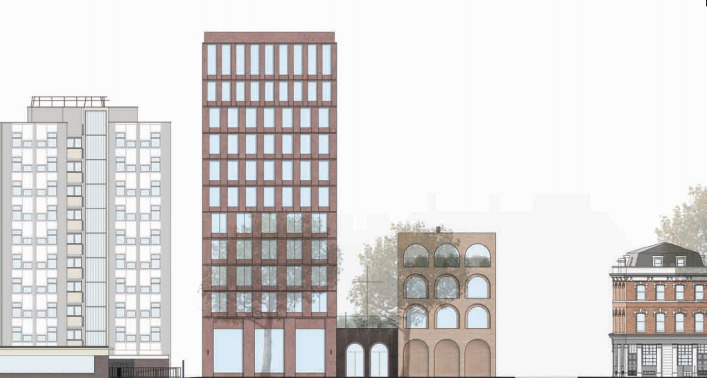 The scheme, designed by Kyson architects, includes a new church alongside the 12-storey Premier Inn

Lambeth's planning applications committee turned down the scheme in March on the grounds that the hotel would be too big for its non-town-centre location and that it would add to a concentration of visitor accommodation that would harm the character of the area and affect the mix and balance of uses.

Applicant Lambeth Developments Ltd took the case to appeal and the final decision by planning inspector David Spencer was published on Monday.

"The scale of provision proposed through this appeal, together with the planned pipeline, may well result in a quantity of hotel accommodation in this part of the borough in excess of forecast need and indicative targets," wrote Mr Spencer.

"There is, however, little persuasive evidence of a resulting tangible harm to the balance and mix of uses in this part of the borough arising from an exceedance of likely need."

He added: "I accept the appeal proposal, in combination with other nearby hotels, would introduce a significant transient population in the area.

"Given the surrounding uses, including tourist destinations, restaurants, pubs and other businesses, as well as the busy character of the adjacent Lambeth Road, I do not find the activity generated by the proposed hotel would be harmful to the prevailing character at the appeal location."

Mr Spencer continued: "There is however scant evidence before me, other than generalised local resident concern, as to how this transient population is resulting in significant harm to nearby residential living conditions."

On the design value of the existing 1950s building, the inspector wrote: "The church complex, whilst of relatively simple, utilitarian appearance is now somewhat tired, reflecting cost restrictions at the time of its post-war construction, and it is in overall poor repair.

"Other than 'The Word' sculpture at the front of the building, which is a noteworthy feature, the building does not make a particularly positive contribution to the character or appearance of the Lambeth Walk and China Walk Conservation Area."

In his conclusion, Mr Spencer wrote: "The appeal proposal would viably replace an existing community building in a poor condition, which requires substantial intervention to address poor layout, no disabled access to upper floors and limited kitchen and WC facilities.

"The appeal proposal would present an opportunity to create a modern, efficient, accessible building of which the existing community and homeless and vulnerable people would be beneficiaries. I give significant weight to these social benefits.

"The proposed hotel use would create 45 new jobs, together with construction jobs, which would be a significant economic benefit. The appeal proposal would also deliver notable environmental benefits in the energy performance of the buildings."