Tower Bridge played to a capacity audience on Sunday night as more than 500 people came to hear the premiere of Samuel Bordoli's 'Live Music Sculpture' on the high-level walkways that span the Thames. 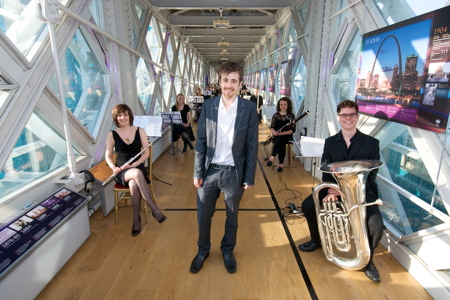 Samuel Bordoli with musicians at the top of Tower Bridge 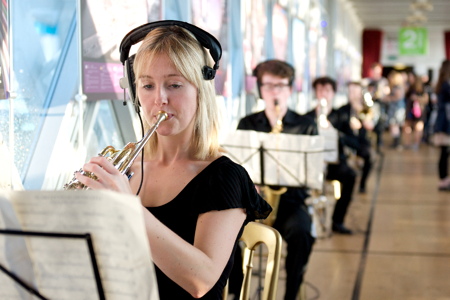 Audiences were able to enjoy a 360-degree musical experience as they walked along the west walkway past the 30 musicians performing the innovative piece by SE1-based composer Samuel Bordoli while enjoying the spectacular views across London.

Bordoli's 'live music sculptures' are built from four elements – buildings, instruments, live musicians and sound – with the only element outside the control of the creator being the movement of the audience through the space.

The composer used the structure of Tower Bridge to play with the ways in which the music is perceived.

The 15-minute orchestral work was repeated in a rolling performance until 9pm.

Earlier in the day, Samuel Bordoli performed ‘Live Music Sculpture One’ at the Monument, just north of London Bridge, where the music travelled up its 311 steps.

“Following the success of last year’s ground-breaking Live Music Sculpture at the Monument, we were delighted to announce another first, this time for Tower Bridge," says Chris Earlie, marketing and creative development manager for Tower Bridge and the Monument.

"It was very exciting to have someone as creative as Samuel to compose music especially for Tower Bridge and the Monument. His musical vision offered visitors a unique experience and we would very much like to perform more of Samuel’s work.”

Sunday's event formed part of the City of London Festival which this year celebrates its 50th anniversary.