Harper Road blue crystal artwork to be displayed in Yorkshire

Roger Hiorns' extraordinary blue crystal artwork Seizure - which was created and exhibited in Harper Road - is to be displayed at the Yorkshire Sculpture Park from spring 2013. 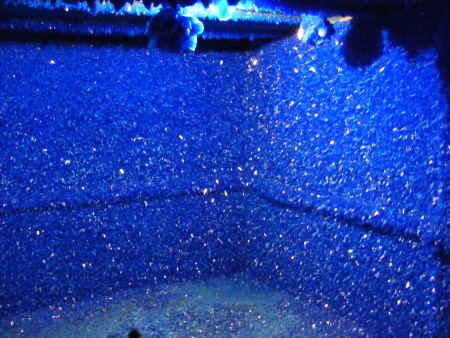 The artwork, which was first opened to the public in summer 2008, was created using 75,000 litres of liquid copper sulphate which was pumped into the flat to create a strangely beautiful and somewhat menacing crystalline growth on the walls, floor, ceiling and bath of the abandoned dwelling.

The piece has now been acquired by the Arts Council Collection with the help of the artist, Artangel and the Jerwood Charitable Foundation through the Art Fund and the Henry Moore Foundation.

The low-rise block of flats in Harper Road was demolished last year to make way for the Harper Square development of new affordable homes.

The work, which weights more than 31 tonnes, was successfully extracted from the building in February 2011. The extraction involved meticulous planning: one wall of the flat had to be removed before the whole structure was pushed out of the building using hydraulic jacks and craned onto the back of a low loader.

The work was later transported to Yorkshire Sculpture Park where it remains in storage awaiting its new installation.

Untitled (Seizure), as the work will now be known, is the subject of a 10-year loan agreement between the Arts Council Collection and Yorkshire Sculpture Park.

"Roger Hiorns' Seizure is a remarkable and important work and one that immediately attracted enormous public attention, becoming almost a cult object while it was on show in London."

She added: "Since Seizure was safely extracted from its original site in 2011, we have been in a careful and measured process of working towards the presentation of the work at Yorkshire Sculpture Park.

"The many issues around the aesthetic and conceptual, as well as the practical concerns of re-locating the work have been explored with the artist and other partners, and I feel certain that once it is open to the public again in the spring of 2013, Untitled (Seizure) will again prove the powerful object of fascination that is was in its original incarnation."

Roger Hiorns said: "Given the choice between an imprecise myth of the past and an unknowable future, the latter was always going to be more interesting, more of a problem. As an object removed from its origin it's forever in limbo – nomadic and unplaceable, and will continue to be. If you have the opportunity to complicate things, you should always take it."