Olympic torch relay organisers have announced details of the flame's final journey through central London on the River Thames on Friday 27 July. 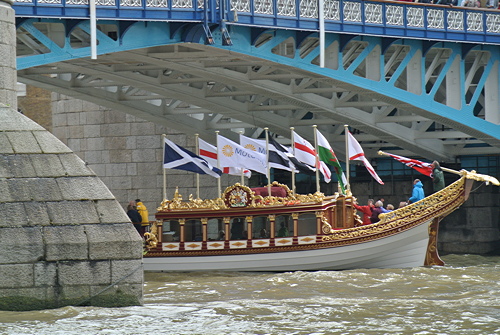 The Olympic flame will arrive at Tower Bridge on board Gloriana. The royal row barge is pictured here passing through the bridge the day after the Thames Diamond Jubilee Pageant. Photo: Ivan Bandura

The flame's journey down the Thames will take place the day after the torch relay passes through Southwark.

At about 7.30am on Friday the flame will be carried on board the Gloriana royal rowbarge at Hampton Court Palace.

The Flame will light a ceremonial cauldron on board Gloriana and over the course of the morning seven torchbearers will light a Torch from the cauldron and carry the flame for about eight minutes each at selected areas that are viewable from the banks of the River.

Gloriana will be rowed by 16 oarsmen and women who will be drawn from a squad of 28 rowers on board on the day.

The squad is made up of former British Olympic crews dating back to the 1948 Games and 'Olympians of the future' from London Youth Rowing.

Gloriana will be accompanied by a small number of craft designed to showcase London's waterborne heritage as the flame makes its way towards the Olympic Stadium.

The finale to the public participation in the Torch Relay will see the last torchbearer carry the flame to Tower Bridge for a final photo opportunity in front of the Olympic rings at approximately 12.45pm.

The flame will then remain out of public view at City Hall until it appears at the opening ceremony the next day.

"The arrival of the Olympic flame is a huge moment for the capital and an incredible opportunity for Londoners to experience, right on their doorsteps, the growing excitement as the countdown to the start of the 2012 Olympic Games moves ever nearer," says Boris Johnson, Mayor of London.

"From Redbridge to Bexley, Richmond to Haringey an incredible array of events and celebrations are planned so I'd encourage everyone to find out what's happening in their local area and get involved in this summer like no other."