With one month to go until the start of the 2012 games, the Olympic rings were lowered into position on Tower Bridge on Wednesday morning. 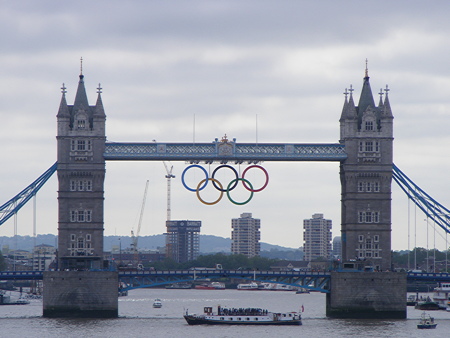 Mayor of London Boris Johnson, LOCOG chairman Lord Coe and the City of London Corporation's Stuart Fraser watched from a boat as the rings – which weigh more than three tonnes and measure over 25 metres wide and 11.5 metres tall – were lowered into place.

The giant aluminium rings were manufactured in Yorkshire at a cost of more than £250,000 and were installed on the bridge on Sunday 17 June – but Wednesday was the first time the rings, which are retractable to allow tall ships to pass, have been lowered into position so they can be seen up and down the river.

Giant Paralympic agitos will replace the Rings on Tower Bridge for the Paralympic Games later in the summer.

During the games, river crossings from Hungerford Bridge to London Bridge will also be lit up in a dazzling display of colour during the evenings and the giant mobile Olympic rings first seen in March will return to the river travelling up and down stream.

"Glorious Tower Bridge is recognised the world over and, adorned with the famous Olympic rings, is the perfect choice to showcase what London has to offer this summer," says Boris Johnson.

"With just a month to go, we are making our final preparations and want to ensure each and every person in the capital gets a flavour of the celebrations and feels part of the games."

From the end of July the lowering of the Olympic rings will form the climax of a nightly light show at Tower Bridge during the games.