A charging point for electric vehicles has been installed in Horselydown Lane near Tower Bridge. 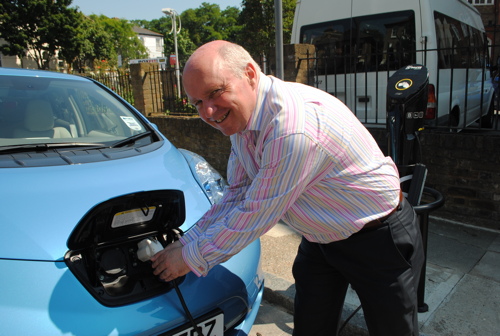 Cllr Barrie Hargrove tries out one of the new charging points

The Horselydown Lane charging point is the fifth to be installed in Southwark as part of the Source London network. Other charging points can be found in Magdalen Street and The Cut.

The charging point in The Cut is often used by Transport for London's own fleet of electric vehicles based at Palestra.

If the current trial proves a success the council says it will consider adding more charging points around the borough.

The street charging points are supplied by POD Point and Chargemaster. Electricity from the sockets is currently free to members of the Source London scheme.

"It's critical for the council to be alert at all times to where we can reduce emissions and help support the environment," says Cllr Barrie Hargrove, Southwark's cabinet member for transport, environment and recycling.

"By offering residents and visitors to our borough various sustainable transport options we can contribute to a greener and cleaner borough which will also benefit London."

Erik Fairbairn, chief executive of POD Point, added: "We are delighted to supply POD Point street charging points to a borough that has made such a clear commitment to diversifying transport and is investing in the infrastructure that will ensure this policy of diversification is successful."