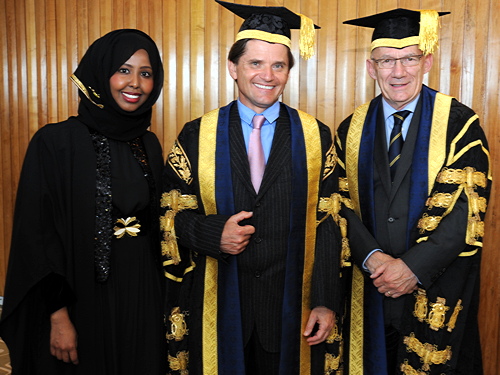 Around 2,400 students from the faculties of arts and human sciences, business, engineering, science and the built environment were joined by their families and friends for the ceremonies.

Richard Farleigh will hold the post of chancellor for the next four years. As the university's ceremonial head, his role will include awarding degrees and acting as an ambassador for LSBU.

At the ceremonies the university also conferred a number of honorary awards in recognition of special contributions to LSBU and to the worlds of science, arts, the built environment and business.

Sir Michael Bear, who served as Lord Mayor of the City of London for 2010-11, was awarded an honorary doctorate in recognidition of his contribution to the governance and mission of LSBU.

An honorary fellowship was bestowed on Sarah Rose whose decision to give her collection of artworks by David Bomberg and member of the Borough Group to the university has led to the opening of the new Borough Road Gallery.

The same honour was accorded to artist Dennis Creffield who studied under Bomberg at what was then the Borough Polytechnic Institute.

Speaking to graduates at the ceremony, Richard Farleigh said: "A university education is the surest, safest way for anybody to move forward in life.

"The rest of your life is a golden opportunity starting from today. If you team imagination, drive and personality, the sky's the limit for what you can achieve in this day and age."

LSBU vice-chancellor Professor Martin Earwicker said: "We are delighted that Richard Farleigh has now formally joined the university as chancellor.

"He is an outstanding role model for our students, and shares in common with LSBU the belief that with talent, drive and ambition you can achieve your goals.

"We are also proud to confer honorary awards to a number of exceptional individuals, who have made such significant contributions to the University and in their own fields of expertise.

"I wish all our graduates every success and happiness in the future and offer my personal congratulations to them all on their achievement. We shall certainly be watching their development with keen interest and hope we can continue to be a resource for advice for them all in the years to come."