A panoramic painting depicting the River Thames and the South Bank on the day of the Thames Diamond Jubilee Pageant has been unveiled in the front hall of the Savoy Hotel. 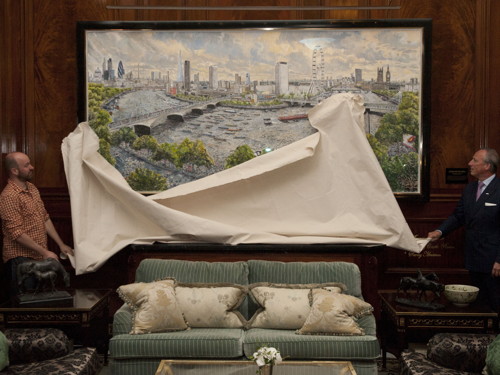 Inspired by a drawing in the Savoy's collection that shows the Thames in 1957 – and by Canaletto's famous work The River Thames on Lord Mayor's Day – artist-in-residence David Downes was commissioned to create the piece for the hotel's front hall.

Positioned at the same vantage point on the roof of the hotel as the 1957 piece, Downes captured the panoramic views in fine detail, including landmarks such as the Houses of Parliament and St Paul's Cathedral, as well as new additions such as the Shard, the Gherkin and the London Eye.

The piece also serves as a record of the historic Thames Diamond Jubilee Pageant held in early June.

"The Savoy has enjoyed a long history of playing host to artists and commissioning artwork," said the hotel's managing director Kiaran MacDonald.

"We are delighted to have continued this tradition by working with David Downes to create a wonderful record of London and of such a historic occasion as the Thames Diamond Jubilee Pageant."

Downes, born in 1971, was diagnosed with high-functioning developmental autism in his thirties and he believes that his artistic talent is connected to his autism. Most of his pieces are cityscapes infused with feeling and emotions, and drawn from memory.

"I was very excited to have been asked by The Savoy to paint such an important occasion," he said.

"The cityscape by itself is inspiring but the pomp and ceremony of the River Pageant made this a unique commission.

"I felt that I had the best seat in London from which to capture these stunning views and the glory of the pageant. It is a day that I will never forget."

Prints of the painting will be available to purchase from the hotel, including a limited edition signed and framed series of 60. For further details contact The Savoy at 020 7836 4343 or email [email protected]