This year's Christmas lights at Southbank Centre have a twist: they rely on visitors to generate the power themselves. 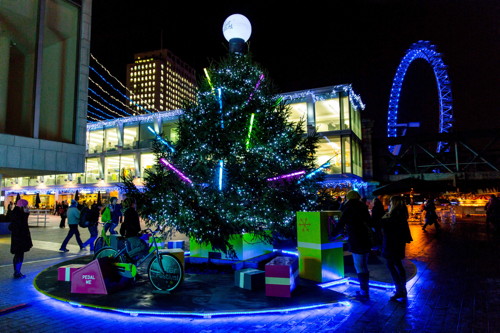 Earlier this year Electric Pedals – which specialises in people-powered installations and workshops – took up residence at the Whites Grounds Skate Park near London Bridge.

"It means it's really easy for us to pop across and visit, we get to engage a lot, see the bikes in use and get feedback and feed off that excitement first hand."

More a kilometre of strung LED tree-lights are powered solely by ten pairs of pedals (5 pairs per tree) – if the humans stop pedalling then the lights go out.

If the same lights had been plugged into the mains for forty days they would have consumed 192 kWh of electricity, equal to making more than 5 million cups of tea, or 11.5 million pieces of toast, or 1.5 million hours of laptop use.

• The trees can be seen on Festival Terrace outside Royal Festival Hall until 7 January.