As it prepares to close the doors of its Tooley Street home at the end of January, the London Dungeon has announced that a selection of gruesome props and exhibits will be sold at a car boot sale in Pimlico. 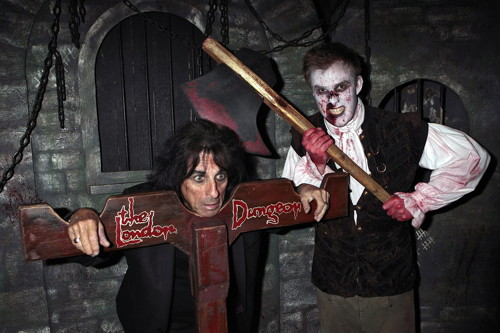 The horror attraction is leaving London Bridge after 38 years and will reopen in March at County Hall on the South Bank.

The move is part of the preparations for the major redevelopment of London Bridge Station.

The new venue will feature all-new costumes, sets and props so the London Dungeon will be setting up stall at Pimlico Car Boot Sale on Sunday 3 February when fans will be able to get their hands on an eclectic selection of scary, funny and downright eccentric lots.

Included in the items up for sale are an array of torture and surgical implements, a mountain of severed limbs and a stash of false eyeballs as well as costumes. There will also be a variety of one-off artefacts, including a set of stocks that have 'held' a host of famous names from Jonathan Ross to Christina Aguilera, One Direction to Michael Douglas and Alice Cooper.

"When we move, we're not just changing address, we really are creating something totally new so inevitably we have rather a lot of items from Tooley Street that need re-homing," explains general manager Ben Sweet.

"Rather than sell them all off to a theatre prop shop or museum we decided to let fans have a chance to own a bit of our horrible history and on Sunday 3 February they will be able to plunder our very unusual car boot stall for a London Dungeon bargain."

The London Dungeon's "carnage car boot" stall will be at Pimlico Car Boot Sale in Lupus Street SW1 on Sunday 3 February from 11.30am until stock sells out.

• There's still time to visit the London Dungeon in Tooley Street: every Friday in January is be "Black Friday" with the first 100 tickets bought at www.thedungeons.com on 4, 11, 18 and 25 January available at the original 1974 entry price of just £3.