Police officers from around the country travelled to Southwark Cathedral on Saturday to attend a memorial service for Police Federation chairman Paul McKeever who died suddenly last month. 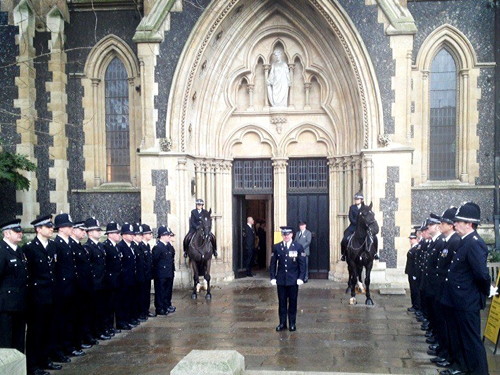 Mr McKeever, 57, had served as a police constable in Lambeth and Bromley before becoming chairman of the Police Federation in 2008.

During his time in Lambeth he married Charmian who worked as a nurse in the accident and emergency department at St Thomas' Hospital.

He died just weeks before he was due to retire from the high-profile national role representing constables, sergeants, inspectors and chief inspectors in England and Wales.

Police officers from forces across the country formed a guard of honour in the churchyard as members of the congregation entered the cathedral.

Home Secretary Theresa May, the Mayor of Southwark Cllr Althea Smith and Sir Hugh Orde, president of the Association of Chief Police Officers, were among those in attendance.

Keith Vaz MP, chairman of the House of Commons home affairs select committee, was one of a number of parliamentarians in the congregation.