A bundle of straw is hanging from the upper walkways of Tower Bridge as a signal to mariners that there is reduced headroom whilst a cradle is constructed for the repainting of the bridge. 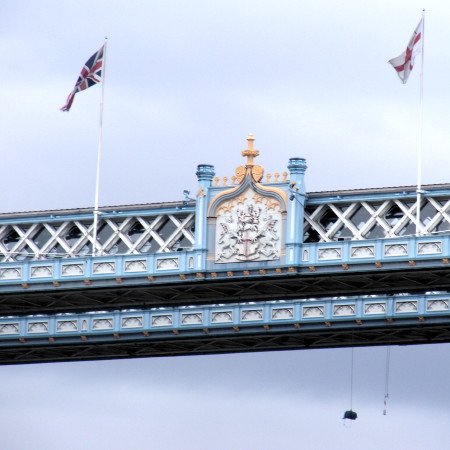 The final stage of the Tower Bridge repainting work began at the end of last month. The City of London Corporation, which owns the bridge, says that the new paintwork, which has a life expectancy of 25 years, is essential to protect the steelwork and preserve the bridge for future generations.

The repainting of the high-level walkways and the bascules will take approximately ten months to complete and work will be carried out seven days a week.

Pyeroy have constructed a temporary access staircase on the south tower, which will be used by the contractors during the restoration of the walkways.

A 40-foot cradle will be attached to the underside of the eastern walkway. It will be transferred to the western side in early September and dismantled in late October.

Port of London Authority by-laws require a bundle of straw to be suspended from the bridge to alert mariners to the reduced headroom.

Originally it was expected that two extended closures of Tower Bridge – one for two months and one for three months, would be required in order to complete these works.

The City Corporation says that by working with Transport for London and painting contractor Pyeroy these closures have been reduced to 36 night time closures.

"We are at the end of our three-year programme to re-paint Tower Bridge," says city surveyor Peter Bennett.

"It is vital to ensure this important London landmark, built in 1894, stays in good working order for decades to come – for all of us to use and enjoy.

"We have been working very closely with Transport for London to ensure the refurbishment is undertaken with as little disruption to local residents and traffic."

The overnight closures will take place between 11pm and 5am and will be completed by November.

The closures have been scheduled to avoid any planned closures to Rotherhithe Tunnel, London Bridge and Southwark Bridge, as well as the forthcoming weekend closures of the Blackwall Tunnel.

The bridge will be closed to vehicles overnight

The bridge will be closed to vehicles and pedestrians

During these closures traffic will be diverted via the Rotherhithe Tunnel, London Bridge and Southwark Bridge.

The Tower Bridge Exhibition, which remains open during the works, is hosting a new temporary photographic display entitled River Thames: Source to Sea. There is a rare picture of water at the source in Gloucestershire. A Duck Tour outside County Hall is placed next to a fishing harbour in the estuary and London Bridge is alongside Wallingford Bridge in Oxfordshire.

A view down on to Blackfriars Bridge reveals the roof of Bankside Lofts and Tate Modern. Admission to Tower Bridge (£7; conc £5; child £3) includes the exhibition on the West Walkway.