Communities minister Don Foster visited Bankside on Thursday to meet residents and businesses involved in drawing up a neighbourhood plan using the provisions of the Localism Act. 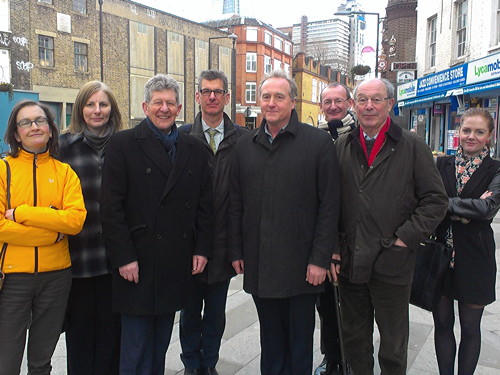 Southwark Council is currently considering a proposal by the Bankside Neighbourhood Forum which has applied for recognition on its proposal to draw up a new planning policy document from the area between Hatfields in the west and Borough High Street in the east.

During his visit to Bankside Don Foster announced a Ł9.5 million, two-year fund to support people in hundreds of areas across the country in creating neighbourhood plans to shape development in their area. Groups of residents seeking to create a neighbourhood plan will be able to bid for up to Ł7,000 each to contribute to the costs of preparing their proposal.

"His enthusiasm for the localism initiative was infectious. We are hoping that our forum and its boundaries will be formally recognised by Southwark Council next week and we can move forward into the exciting community consultation stage.

"We want to reach as many residents and businesses as possible and include their ideas and comments in our emerging draft plan."

The Liberal Democrat minister said: "This government is all about giving power back to people locally to allow them to shape their community, and these powers are kicking in.

"We've already seen overwhelming support for the first neighbourhood plan in Upper Eden and there is real appetite in hundreds of communities across the country to follow suit. This funding will provide practical help to people to make neighbourhood plans a reality in their community."

It is nearly two years since the then decentralisation minister Greg Clark visited Bankside to announce that the area would be one of the first where residents and businesses would work together to draw up a planning policy document.

If Bankside Neighbourhood Forum's proposals are accepted in a referendum of residents and businesses they will become part of the policy framework used by Southwark Council when planning applications are decided.

This week Southwark Council hosted a meeting between four groups intending to draw up neighbourhood plans for parts of Bermondsey. As well as the proposals from Bermondsey Neighbourhood Forum and Bermondsey Village Action Group, new bids for neighbourhood forum status have come forward from 'Riverside' and 'Bermondsey Market' groups.