Chef Raymond Blanc has visited a new food-growing garden on the White's Grounds Estate to launch the Royal Horticultural Society's 2013 national gardening competition Britain in Bloom which has an 'Edible Britain' theme. 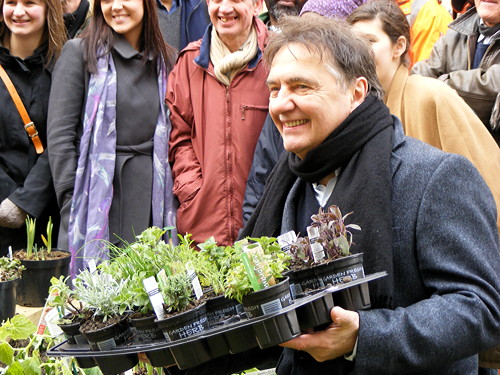 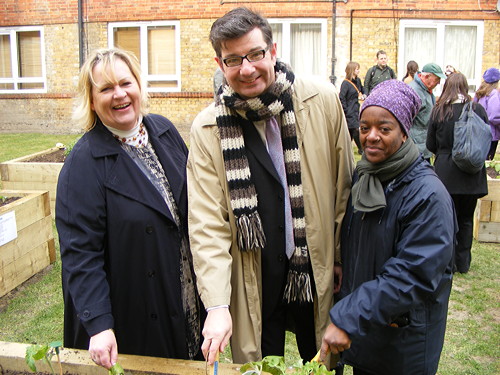 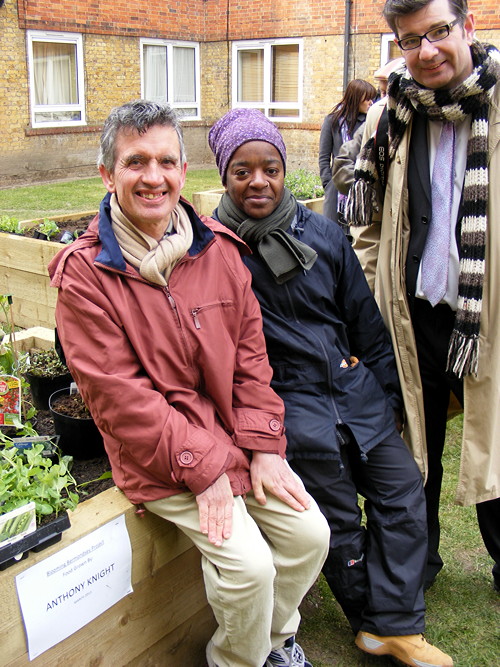 Resident Anthony Knight has already adopted one of the raised beds

"I am delighted to be part of a campaign that adds so much value to local communities," said the famous chef who grows his own vegetables and herbs in the garden of his Oxfordshire restaurant Le Manoir aux Quat'Saisons.

"There are so many wonderful ideas to grow food even in smaller spaces – from produce in hanging baskets to community herb boxes."

He added: "Once they've grown the produce, I hope communities get together to cook it, too, and enjoy together the fruits of their labour."

Blanc's business empire also includes the Brasserie Blanc chain which has a branch on the South Bank.

Co-ordinating gardener Carole Wright was at White's Grounds at 5.45am on Monday to be ready to greet weather forecaster Carol Kirkwood who broadcast live from the estate during BBC Breakfast.

Also present were residents and their children who were joined by RHS director-general Sue Biggs, Georgina Dawkins from Team London Bridge and Leathermarket JMB chair John Paul Maytum ready to help with planting. Raymond Blanc, who spoke of his love of gardening, offered advice.

"It's fantastic to have Raymond backing this campaign," said Sue Biggs.

"Edible gardening in a community gives people access to great-tasting, fresh food right on their doorsteps. With Raymond on board we're sure it'll inspire them to create some delicious home-cooked meals, too.

"Encouraging thousands of people across Britain to grow produce won't solve food security issues, but it can help us to become more self-sufficient and learn where food comes from. Growing salads and fruits can also reduce food miles, as transporting fresh produce involves lots of road transport and refrigeration. The added bonus is that nothing tastes better than seasonal, fresh, home-grown food."

White's Grounds has tweleve new raised beds planted with vegetables from RHS Wisley and herbs. Nearby are an orchard with apple, pear and quince trees, a fruiting hedge and a wild flower meadow. Residents have already adopted some of the the beds and children are being appointed as 'tree leaders'.

Georgina Dawkins of Team London Bridge said: "Having collected a silver award in the urban community category in 2012, the London Bridge area is awash with ideas, enthusiasm and initiative to do even better this year.

"Britain in Bloom gives us the opportunity to demonstrate the importance our community places on making our area a more pleasant place to be and behaving in a responsible, sustainable way."