Public Enemy at the Young Vic

You would be hard pushed to guess that Public Enemy was written in 1882 if you did not know it to be an Ibsen. 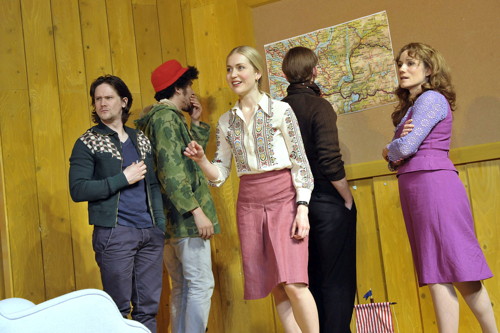 Thanks to the visionary writing of its author, it continues to resonate with and remain relevant to today's audience.

The public enemy in question is an idealistic doctor who discovers that his town's baths are contaminated with potentially deadly bacteria.

Unsurprisingly, those in positions of power are horrified by this revelation, fearing a significant loss of revenue for the town. Instead of acting in the public's wider interests, they seek to discredit Dr Stockmann and suppress the truth.

Public Enemy follows hot on the heels of another Ibsen at the Young Vic – A Doll's House. Yet the use of garish colours and sometimes surreal touches are more reminiscent of the less recent Young Vic production, Government Inspector. Both plays have a writer and director in common – Richard Jones and David Harrower. With Public Enemy, Jones and Harrower have once again breathed fresh life into a play which would have lost some of its brilliance had it been staged in the era in which it was first performed. They have also injected more comedy into the play than Ibsen likely intended, enhancing rather than detracting from the performance.

Nick Fletcher as the principled Dr Stockmann holds the attention of the audience throughout, particularly during the lecture scene in which he addresses (and accuses) the audience. Niall Ashdown as the self-serving businessman Aslaksen is also compelling, particularly in his scenes with Darrell D'Silva, mayor of the town. One of the flaws of Ibsen's play is the pace at which some of the lesser characters change their world outlook from socialist ideology to capitalist pragmatism within a matter of scenes; yet Adam Best and Bryan Dick, as the journalists Horster and Hovstad, manage to gloss over this with their excellent portrayal of both naivety and stupidity.

The most interesting aspect of Ibsen's Public Enemy is not, as is often suggested, his exposure of corruption; his play exposes fear more than dishonesty. His criticisms of politicians and journalists feel almost a little too obvious, given how desensitised we now are to them. Instead it is Dr Stockmann's diatribe against public opinion that causes the audience to sit up and listen; he ultimately turns his anger on the silent majority rather than the political elite.

One interesting question to consider is whether Ibsen could, or would, have written Public Enemy in today's ultra-connected world. The suppression of a scientific discovery on this scale would certainly have been much more challenging. Yet the fickle nature of public opinion remains true, and the Young Vic's production vividly reminds us of this.