Southwark's new Mayor Abdul Mohamed has chosen the Evelina Children's Hospital in Waterloo as his charity for his year in office - and has promised to travel by public transport and bicycle instead of mayoral limousine. 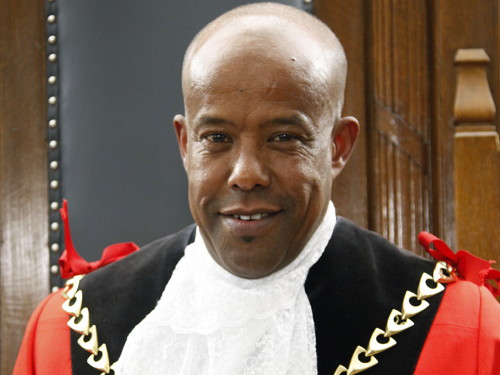 Cllr Abdul Mohamed, a Labour councillor for Faraday ward in Walworth, was elected as Mayor of Southwark at the council's annual meeting on Wednesday night.

Cllr Mohamed was born in Kenya's rift valley to Somaliland parents. His grandfather had immigrated to Kenya as a soldier with the King's African Rifles camel corp.

He is married to Caroline McDonald, an Australian, and they have one son. They have lived in Peckham for 25 years.

He has also worked in inner city regeneration since the late 1980s, including stints with Haringey and Lambeth councils. He has been one of the Faraday ward councillors since May 2002.

The new Mayor is a keen cyclist who champions cycling in Southwark. In his new role he has committed to making less use of the mayoral car and more use of public transport and his bicycle.

It is one of a number of changes to the Mayor's role which will soon be announced in the light of the findings of the recent civic review.

"It is an honour for me to be elected Mayor and I am really looking forward to representing Southwark in this important role," he said.

"As Deputy Mayor I was fortunate enough to meet many local people who never failed to impress me with their sense of community and compassion for the most vulnerable in society.

"They are the epitome of the fairer future philosophy this council subscribes to. I hope that I can continue to work with everyone in Southwark to celebrate the love we share for a corner of London that is forever England while also being home to the nations of the world."

Cllr Mohamed will use his year in office to raise money for the Evelina Children's Hospital. Now based in Lambeth at St Thomas' Hospital, the Evelina was founded in Southwark at Mint Street.

The Evelina is currently the subject of a major fundraising initiative led by the Southwark News and backed by councillors of all parties. Forthcoming events include a comedy night at the Ministry of Sound organised by Cllr Neil Coyle.

At Wednesday night's meeting council leader Peter John announced a small reshuffle of his cabinet. Chaucer ward councillor Claire Hickson leaves the cabinet after just a year and is replaced as cabinet member for communities and economic wellbeing by Cllr Victoria Mills.